Ridiculous bills that trample on reproductive freedom, gynoticians who interfere in women’s medical decisions — in the fight for women’s health and rights, it can feel like we’re constantly in the trenches. But it’s not all an uphill battle.

In fact, women’s health advocates have seen a lot of wins lately. Here are just a few wins from the past few weeks:

Secretary of State Hillary Clinton and Senator Bernie Sanders, who recently announced their candidacy for president, draw a clear and welcome contrast with the 2016 GOP candidates on women's health. Just read what they’ve said about women’s health:

But it’s not just about what they say — it’s what they do. Clinton and Sanders both have a great record on women’s health. They both support Planned Parenthood and expanded access to birth control. And they would ensure that abortion remains safe and legal.

Let’s hear it for these pro-women’s health contenders! Now see where all the presidential candidates stand on women’s health.

We appreciate her hilarious, yet refreshingly honest, comic relief.

On April 22 the U.S. Senate approved a much-anticipated bill to support human trafficking victims — a bill that had been delayed for about six weeks because anti-women’s health politicians inserted an unprecedented extension of the Hyde Amendment into the bill. This amendment is a decades-old ban on federal funding for abortion for low-income women (except in very narrow circumstances). Thankfully, with the help of pro-women’s health politicians and Planned Parenthood supporters, the Senate removed the extension. With that settled, Congress was able to confirm Loretta Lynch as the nation’s new Attorney General.

In a huge win for Montana women, Governor Steve Bullock vetoed three abortion restrictions and signed a bill protecting family planning funding. In particular, the bill will help ensure that women will have access to basic health care, such as mammograms, family planning services and cancer screening. "A woman's reproductive health shouldn't be subject to the political whims of the Montana Legislature,” Bullock said. 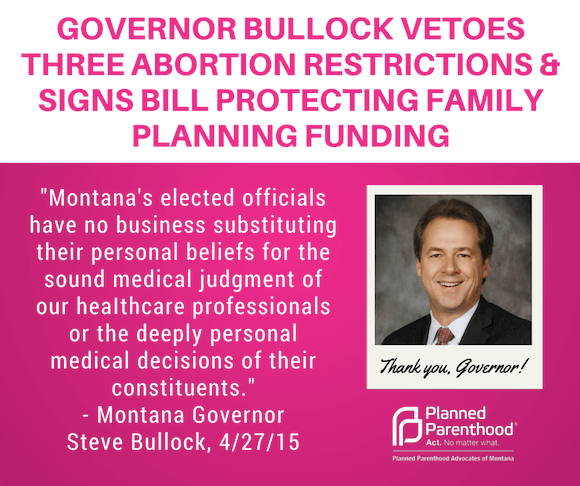 No Abortion Bans. Not Now, Not Ever.

Here’s how you can take action to stop the extreme abortion bans sweeping the country and join the #BansOffMyBody movement.

Uncover the latest attacks on our health and rights.