On March 2 more than 3,000 reproductive rights advocates from around the country rallied outside the Supreme Court while Justices heard oral arguments in the case Whole Woman's Health v. Hellerstedt. The stakes for women in this case cannot be overstated. A woman's very right to access safe, legal abortion is on the docket, and the consequences for women will reverberate far beyond Texas.

Reproductive rights advocates traveled up to 1,700 miles and braved cold temperatures to rally at the steps of the Court. Speakers voiced their outrage at the severe, medically unnecessary restrictions that have had devastating effects on women in Texas and across the United States.

But the speakers didn’t stop at outrage. They shared inspiring, stigma-smashing stories of accessing and providing safe, legal abortion beyond all odds. The crowd’s energy surged with each chant of “STOP THE SHAM,” calling on the Court to see burdensome restrictions for what they really are: political ploys to ultimately ban safe, legal abortion. Speakers also called on attendees to vote out anti-abortion politicians — and vote for women’s health champions — in the 2016 election.

What About the Other Side?

That was our side of the Rally to Restore Abortion Access. You may be wondering: What did the anti-abortion rally look like? Well, it was like this: 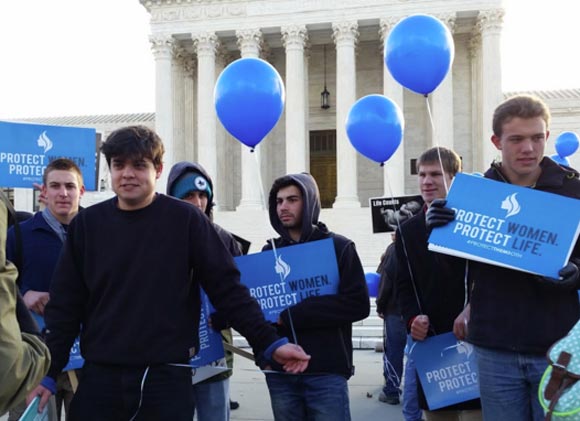 Who’s Reproductive Rights Are At Stake in 2016?

The answer: OUR reproductive rights. Not just women’s rights — but that of every single American. Voting this election is one of the most important things you can do to make sure that our reproductive rights are not held hostage by backwards politicians.