When was the last time you asked a politician for medical advice? We’re guessing never — but that hasn’t stopped New Jersey District 13 Assemblyman Declan O’Scanlon from playing doctor and blocking women’s access to care.

Back in 2010, funding for family planning services was eliminated from the New Jersey state budget. This funding went to vital preventive services, like cancer screenings, birth control, and testing and treatment for STDs. At the time the funding was eliminated from the budget, it accounted for less than 0.022% of the entire statewide budget — a drop in the bucket for keeping New Jersey healthy.

Since then, the number of cases of bacterial STDs has gone up more than 27% statewide — and in one-third of New Jersey counties, the increase has been nearly 50% or more. In four out of the five counties where family planning health centers closed following the initial budget cuts, the rise in STD cases has surpassed the state average. There are more than 1 million women in need of contraceptive services in the state — and many more who have unintended pregnancies and breast and cervical cancer cases in New Jersey every year. 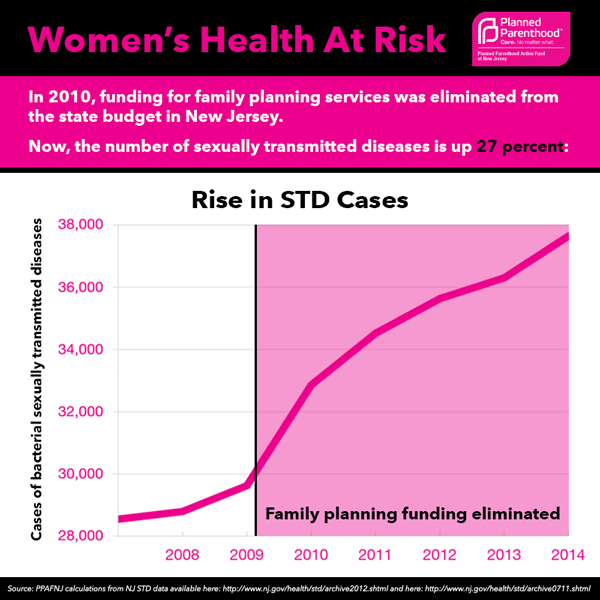 During a recent public budget hearing, Assemblyman O’Scanlon said at a hearing that he hasn’t heard from a single woman who can’t access reproductive health care in New Jersey since the budget cuts.

We at Planned Parenthood Action Fund New Jersey know of at least one woman who called before he made that comment at the hearing:

Mariel, a young woman who is a resident of Assemblyman O’Scanlon’s district. Recently, Mariel needed emergency contraception when her birth control failed. Mariel quickly discovered that the Planned Parenthood in her neighborhood had closed because of budget cuts. Mariel ended up driving 40 minutes to buy emergency contraception – an inconvenience for her, but an insurmountable barrier for many women in New Jersey.

Assemblyman O’Scanlon also said women who need care should call his office. O’Scanlon thinks women who are already struggling to make ends meet — women who are choosing between paying for birth control or paying for groceries that month — should have to navigate government red tape alone and wait for her legislator to call her back.

When’s the last time you called a politician because YOU needed to make a doctor’s appointment?

Tell Assemblyman O’Scanlon that this is absurd. Remind him that he’s a politician, not a doctor!