It is shocking.  The Colorado legislature just defunded one of the most successful teen pregnancy prevention programs in the entire country. This program reduced teen birth rates by an extraordinary 40%, a feat that won our Feat of 2014 Award (naturally). It was so successful that extreme anti-women's health politicians just ended it. Huh?!

In 2008, private grant-funding went to the Colorado Family Planning Initiative to expand family planning services in the state.

Between 2009 and 2013, the initiative gave teens free and low-cost reversible contraceptives, like IUDs and implants. Last year the investments in these long-acting reversible contraception (LARC) methods proved to dramatically reduce teen birth rates for the women and girls in the program.

Despite all that success, three out-of-touch Republican senators in the Colorado legislature are putting an end to the program’s private grant-funding this summer. They voted against H.B. 1194, which would have continued the program by appropriating state dollars for its funding.

This follows a narrow Republican takeover of the Senate in the elections in November — a reminder of how much elections really do matter. 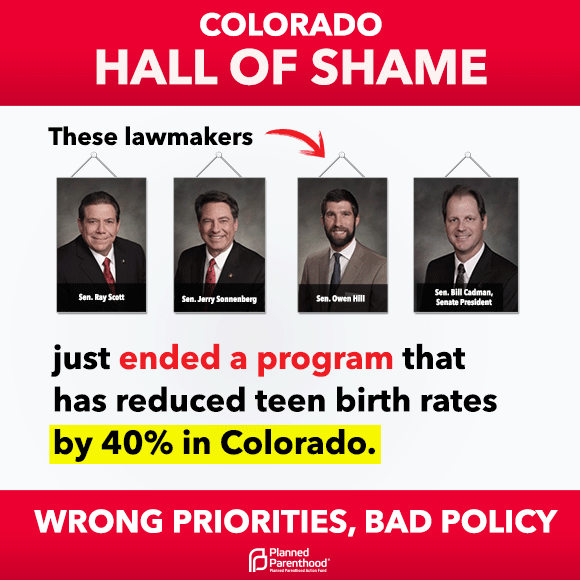 In addition to the Colorado women and girls who would have been helped by continuing the LARC methods program, the state could have saved millions of dollars. In fact, the program saved Colorado $42.5 million in 2010 by reducing the costs associated with unintended pregnancy.

The hypocrisy of this decision and its effect on women’s health are unacceptable.  Many who opposed the LARC methods program, which significantly reduced both the teen birth AND abortion rates, are the same legislators who sponsored and supported other anti-women’s health legislation.

And now, these Colorado gynoticians — who think they know what’s best for women’s medical needs — are turning their backs on all of the good things the program has done and would continue to do. The truth beneath their hypocrisy is clear: These gynoticians oppose a woman’s right to make personal health care decisions, including accessing affordable and effective contraception.

Colorado had the opportunity to continue a program that supports women’s health and families, and they blew it. We are deeply disappointed that the legislature failed to help Colorado women succeed.

Hattie Landry is the Policy and Advocacy coordinator for Planned Parenthood of the Rocky Mountains.

She also has dangly IUD earrings. →