Mike Pence isn't your average anti-abortion governor. Not only has he signed 8 anti-abortion bills into law in Indiana — including one of the most extreme, invasive abortion laws in the country — but one bill he signed into law earlier this year was so extreme that even some of his fellow anti-abortion Republicans had a problem with it.

They called one provision of the bill “dangerous” and warned that it could lead to “back-room abortions.”

No wonder he’s considered a “hero” to anti-abortion extremists!

Pence’s law sparked protests in Indiana and around the country, including more than a thousand protesters who gathered outside the Statehouse in Indianapolis after Pence signed the bill.

The law inspired an Indiana woman to launch a Facebook page called Periods for Pence, encouraging women to call Pence's office to report on the status of their menstrual cycle. 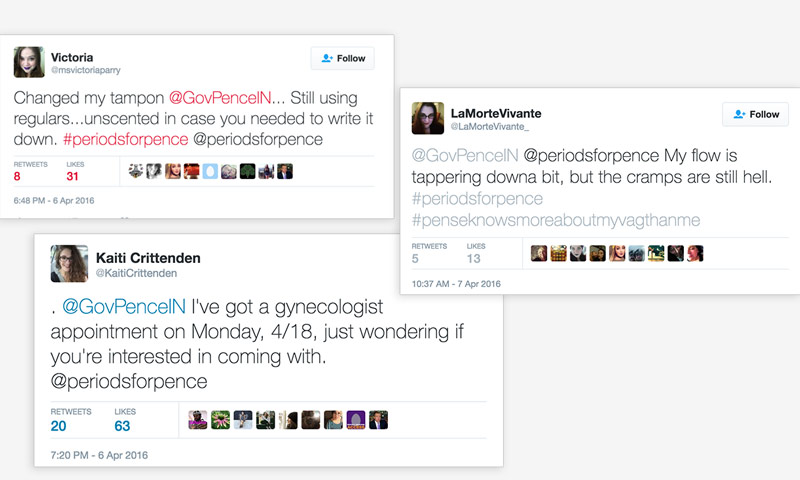 Maybe you remember reading something about that?

Pence’s office received thousands of protest calls and messages via social media, thanks to #PeriodsForPence. But it wasn’t just women who found his bill unacceptable. Several provisions of the law were blocked in June by a federal judge, days after the Supreme Court ruled that similarly brazen restrictions on abortion providers in Texas were unconstitutional.

Not that outrage, protests, or even the law can deter Pence from his mission to ban safe, legal abortion and, as he has been saying for years, to see “Roe v. Wade consigned to the ash heap of history.” Back in 2006, he said that Justice Alito should be confirmed to the Supreme Court because he would “make it possible once and for all to end Roe v. Wade.”

While he was in Congress, Pence tried to find all kinds of creative ways to restrict or outright ban abortion. For example, he cosponsored several so-called “personhood” bills — four of them, in fact — that, if enacted, could have criminalized abortion in all cases. From the moment of conception. With no exceptions. They could have even restricted access to some forms of birth control!

That’s not all, though. Oh no. Pence tried to redefine rape in order to ban abortion, and he even cosponsored a bill that would have allowed hospitals to deny abortions to pregnant women who would die without the care.

As Indiana’s governor, Mike Pence continued to pursue backward policies that are harmful to the health and well-being of women and their families. He signed a $3.5 million contract with a crisis pregnancy center to promote giving women anti-abortion propaganda instead of unbiased pregnancy counseling. The contract took $3.5 million from the state’s Temporary Assistance for Needy Families (TANF) program, which provides aid to low-income families, and gave it to the Pennsylvania-based anti-abortion group “Real Alternatives,” to “promote childbirth rather than  abortion.”

And when Indiana experienced an unprecedented and severe HIV outbreak, Pence put his conservative ideology before the public health of his state for more than two months after the outbreak was detected, because he was morally opposed to the recommendations from local, state, and federal health officials. Health experts said the HIV epidemic could have been prevented but was instead worsened because “the state of Indiana does not invest adequately in public health.”

Pence was also condemned by health officials in Indiana condemned for downplaying the risk of HPV — especially in a state where the vaccination rate “is especially low” — and warned that Pence’s position “undercut public health entirely.”

Throughout his career, Mike Pence has never shown that he understands reproductive health.

And given his long and horrible record of opposing access to basic health care — and his nearly decade-long obsession with trying to “defund” Planned Parenthood — it seems he hasn’t learned anything since then.

The bottom line is that Donald Trump supports policies that would be harmful to the health and well-being of women and their families, but his running mate Mike Pence has already shown us the dangerous consequences of those extremist policies and given us a frightening preview of what the whole country could like under a Trump-Pence administration. And that’s something the women of this country cannot afford to let happen.