From discussing the pay gap to acknowledging the fact that because of Obamacare, being a woman is no longer a pre-existing condition, the panelists and speakers addressed an array of issues, acknowledging that there is still a ways to go to achieve the type of equality women and families deserve. In her remarks kicking off the campaign, Valerie Jarrett, senior adviser to the president and chair of the White House Council on Women & Girls, called it “an important step in our effort to make the 21st century an era of equality.” 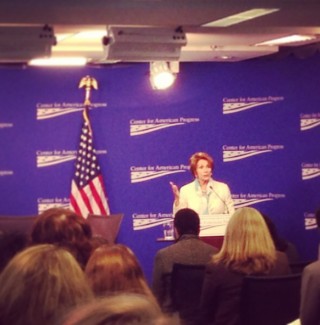 Policies that improve the lives of women are critical to ensuring families are not just getting by, but getting ahead and the nation is moving forward.  The reality is right now women make up 47 percent of the U.S. labor force, but only 4.2 percent of Fortune 500 CEOs.  Not to mention the fact that 40 percent of households have women breadwinners, but women are only making 77 cents on the dollar compared to men.  To succeed in the workplace and to succeed in life, women need a fair shot to earn what they deserve and they need.

But the workforce isn’t the only place where we need to improve; protecting women’s health and rights is another critical aspect of this campaign.  In the last few years we’ve seen record numbers of bills designed to chip away at women’s health and rights—whether they are trying to let your boss decide whether you can get access to affordable birth control or cut off women from cancer screenings, these types of bills are passing in states where there is already very little access to women’s health care.  Politics shouldn’t interfere with a woman getting accurate and medically-sound advice from her doctor.  In some states, that’s the reality.

Women play a central role in their families and the nation’s well-being, and these types of policies jeopardize the health and well-being of families across the country.  We know that women’s health issues ARE economic issues.  So, as part of this effort, we’re working to advance policies that expand access to health care, ensure that no copay birth control is protected, and keep politics out of the exam room.

Women deserve a fair shot at a level playing field at all levels of government, the workplace, and beyond.