March is the time of year when we tip our hats to the women of then and now who have moved us to a more equitable world. Whether we look to the distant past of Margaret Sanger and Sojourner Truth, or we look at today’s major headlines with #BlackLivesMatter creators Alicia Garza, Patrisse Cullors, and Opal Tometi, we see women at the forefront of the most important movements in American history. But for me, celebrating Women’s History Month isn’t just about celebrating women’s history. As a genderqueer1 poet, student, and activist, I believe it’s time to raise up all the voices that are too often silenced or cast to the side.

So right here, I want to give a shout-out to all the trans*/genderqueer/gender fluid/non-binary badasses out there who are making strides in gender equality and breaking down toxic gender stereotypes within our society. Here’s to you: We see you, we support you!

My Story, My Inspiration

I’m part of Planned Parenthood Generation Action, which is a movement of young people across the country, from sunny California to the snowy peaks in Maine, who are fighting for reproductive freedom. I’ve been working to raise up genderqueer and trans* voices within this movement and within Planned Parenthood — but I haven’t done it alone. A lot of inspiring voices propelled me to do this work, and it is they who I tip my top hat to this month.

When I moved to Denver for college, I discovered a kind of performing that I had never seen before: spoken word poetry. For me, spoken word was the perfect form of art, self-expression, and political defiance. After I saw Andrea Gibson, they2 became one of the loudest voices in my head.

Andrea speaks about what it’s like to be actively anti-racist, a raging feminist, a fighter, and a lover all wrapped into one body — and not be in the binary (where you solely identify as a man or a woman).

Andrea, along with Kelsey Gibb, started Stay Here With Me, which is based on Andrea’s poem “The Madness Vase” and focuses on suicide prevention through love, art, and community. Stay Here With Me reminds us that being vulnerable is one of the strongest things we can do, and it encourages us all to stay here with each other.

Andrea and Kelsey inspired me to come out of my shell as a poet, and to use my poetry as a way of creating community and healing. Not too long after, genderqueer/feminist/racial activist Alok from Darkmatter changed how I think about activism. Alok’s voice challenged me to question: “Is my feminism and trans* activism truly intersectional? And why are some of my trans* communities all white?” These questions spurred me to speak out against subtle racist undertones inside some trans* communities. I also learned to move back so that queer, trans* people of color could take the floor and have their voices ring as loud as they should have been all along. 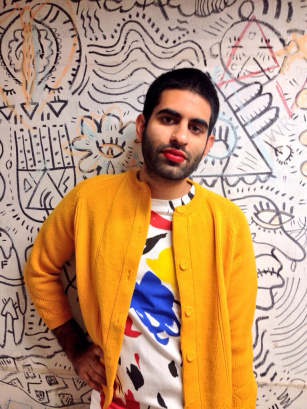 Photo: Activist Alok Vaid-Menon breaks down the gender binaries that relegate us to the simple codes of male or female with their initiative Dark Matter Rage (Source: ReturnTheGayze.com).

I was asking myself all these questions while also attending school and working on campaigns, when I had just worked myself into the ground. When I had counted myself out and thought that there was no hope for the world I wanted to create. At that time, a trans* woman named Lourdes Ashley Hunter breathed new life into my activism.

Lourdes Ashley Hunter is one of the co-founders of the Trans Women of Color Collective (TWOCC), an organization that rose up in outcry at the murder of Islan Nettles in New York City. The TWOCC has been a raging force, spreading awareness of the dozens of murders of trans women of color across the United States. At the helm, Lourdes Ashley Hunter is unapologetically telling her story about being a trans woman of color, and lifting up others’ stories as well.

I first heard Lourdes Ashley Hunter speak in Washington, DC, and a quote from this encounter stuck with me. While discussing ground rules for creating a safe space, someone said you should “assume best intentions.” Hunter replied with the idea that, “I don’t want to have to assume best intentions when you speak and say something off-putting. I want you to be intentional with the language you are using.” This concept — actively thinking of the impact our words and actions will have on individuals and our movement as a whole — always comes into my head when speaking about social justice.

Walking Through This World

I carry the words of these people with me, to inspire me to be intentional with my language and my actions. To challenge how I walk through this world and the space that I take up. That inspiration has now moved me to action to promote more inclusive health care systems for trans* and genderqueer communities.

This Women’s History Month, I honor not just my cisters — those women who identify and present as the female gender they were assigned at birth. This month, I also honor all my sisters (including trans* women), and my siblings (like all men, transmen, and genderqueer folk).  As a genderqueer activist reflecting on Women’s History Month, I see how far we’ve come in the movement for gender equality and trans* health care access — and how much further we have to go.

We need more leaders and decision makers in health care who fight for trans* folks, from the doctors office to the courtroom. We need more trans* health care services in safe places — like the Planned Parenthood health centers in Colorado and New York. We need to create a society that allows bodily autonomy for everyone.

Planned Parenthood supporters have long fought for women’s right to make their own health care decisions — and now I call on you to fight for trans* people’s right to access the health care they need, too. And I challenge you to share: Who in the genderqueer/trans* community has inspired you to create social change?

2They is used as a gender neutral pronoun.