Scott Walker just announced his presidential bid. Yet he is still doing what he does best: promising to further restrict abortion.

Alongside extreme groups with the stated goal of banning abortion, the Wisconsin Governor called for a law that will ban abortion at 20 weeks. It will mark the fifth abortion restriction that Walker will have signed into law as governor. It's also a stark reminder of the extreme agenda that he’d bring all the way to the White House if given the chance.

The bill now goes to Governor Scott Walker. Eager to burnish his conservative credentials ahead of his anticipated campaign for president, Walker specifically asked the legislature to send him the bill and has said repeatedly that he will sign it.

Wisconsin is the 15th state to pass a bill prohibiting abortion at 20 weeks or earlier. The bans are rooted in the belief that fetuses can feel pain at 20 weeks, a claim that has been disputed by the American Congress of Obstetricians and Gynecologists.

Scott Walker: Women Should Be Forced to Have Ultrasounds Because They Are “a Cool Thing”

During an interview with conservative radio host Dana Loesch last week, Walker bragged about his anti-choice record, highlighting his recent decision to sign a bill that requires women to undergo medically unnecessary ultrasounds before having an abortion. According to the GOP governor, the measure is partly an effort to coerce women into staying pregnant, but Walker also stood behind it because he thinks ultrasounds are just “a cool thing.”

No Exceptions for You!

In March, as doubts about his anti-abortion credentials were raised by national conservatives, he pledged to sign a 20-week ban that was “likely to come to my desk.”

What he did not explain was that he had asked Wisconsin lawmakers to send him just such a bill, during a meeting in his office with Mr. Fitzgerald and Robin Vos, the speaker of the State Assembly, also a Republican.

“Walker weighed in and said the 20-week abortion ban is something he would like to see hit his desk,” Mr. Fitzgerald said. “It sent a message to us.”

The governor specified that the bill should include no exceptions for rape or incest, according to Mr. Fitzgerald.

See how Scott Walker and other presidential hopefuls compare on abortion, birth control, and family planning. 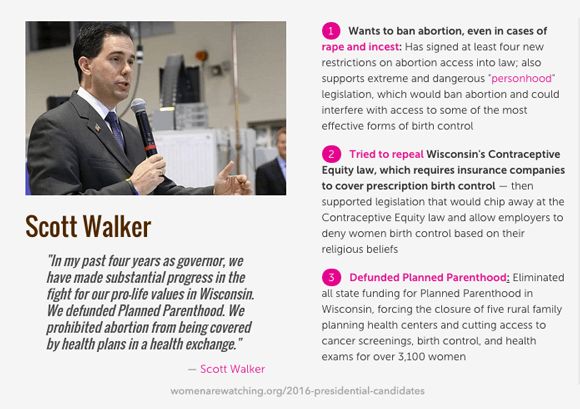