We won’t let those politicians break up our benefits. Let’s celebrate this two-year anniversary by remembering what birth control coverage was like before the ACA, toasting what we’ve gained since — and bringing what we know to the polls in November.

Before the Affordable Care Act:

Before women became eligible for the ACA’s birth control benefit, more than half of young adult women (55 percent of those between the ages of 18 and 34) experienced a time when they could not afford to use birth control consistently, according to a 2010 survey.

Many women with insurance had copays for birth control pills of $15 to $50 a month, and even greater up-front expenses for long-term contraception like the IUD (which can cost $500-$1,000). But it’s not just about money. The high price of birth control can result in women using it inconsistently or not at all, often leading to unintended pregnancies.

After the Affordable Care Act:

Under the benefit that went into effect on Aug. 1, 2012, new health insurance plans are required to cover women’s preventive health care services with no copays. At that time, 27 million women from all corners of the country became eligible for copay-free birth control for the first time.

Two years later, more than 30 million women nationally are now eligible for the benefit (and once the health care law is fully implemented, more than 47 million women will be eligible). Moreover, women have saved nearly $500 million across the country in avoided out-of-pocket costs for birth control.

Take it from one of Obamacare’s supporters: 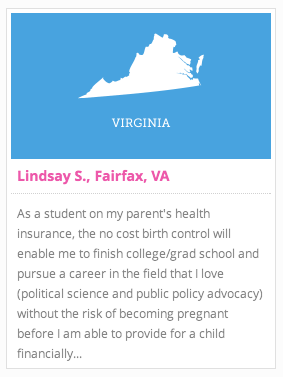 Lindsay is not alone. Women from all over the country are sharing their stories of how Obamacare works for them.

Who’s Got a Ballot & an Eye on Politicians?

Here’s to a happy anniversary with the ACA — and to keeping watch on those politicians who oppose it.