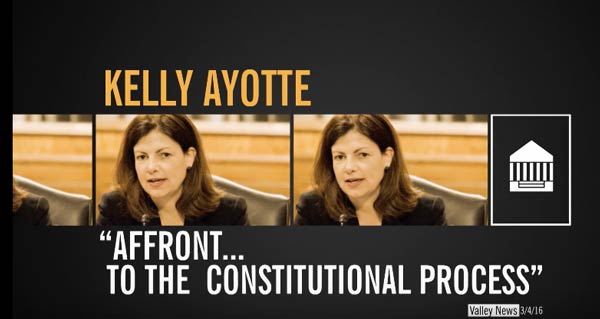 The American people deserve a full court and a justice appointed by the president they elected for four years — not three—and Kelly Ayotte’s extreme position abdicating her constitutional duty in order to obstruct the creation of a fully functional branch of our government is unconscionable.

NARRATOR: For months, Senator Kelly Ayotte has followed party bosses -- refusing to fill the Supreme Court vacancy. For years, Ayotte has waited for an opportunity to push for someone to end access to safe, legal abortion and overturn Roe v. Wade:

KELLY AYOTTE: “Well, I certainly think that Roe should be overturned but I think that has to be done at the United States Supreme Court.”

NARRATOR: For New Hampshire women, the consequences of letting Kelly Ayotte play politics with the Constitution could last a lifetime.

Kelly Ayotte has voted repeatedly to “defund” Planned Parenthood, and has even voted against equal pay legislation. 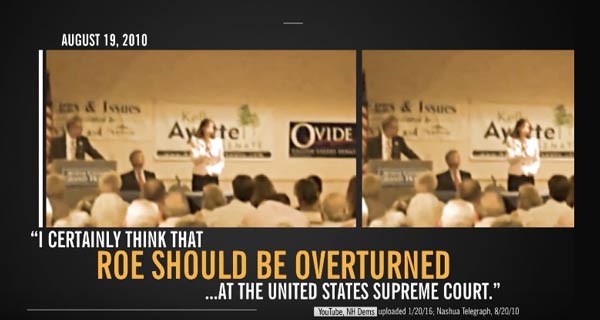 This Senator has spent years calling for an end to safe, legal abortion and for Roe v. Wade to be overturned, and even went so far as to circulate a letter urging support for a bill to ban abortion after 20 weeks that included extreme provisions for rape survivors.

“Kelly Ayotte may try to paint herself as pro-woman, but her record tells a very different story. Every chance she’s gotten she’s voted to ‘defund’ Planned Parenthood and cut women off from essential health care like birth control and breast and cervical cancer screenings. She has been advocating for years to ban women’s access to safe, legal abortion, and it’s clear she now sees her chance in the Supreme Court process.

Kelly Ayotte is refusing to do her job, and abdicating her constitutional duty, in order to push an extreme agenda that no one in New Hampshire wants. Enough is enough. Kelly Ayotte’s bad politics could have repercussions for a lifetime.”

Ayotte’s latest obstruction in refusing to even consider the President’s Supreme Court nominee will have real life consequences for New Hampshire women and could jeopardize access to safe and legal abortion for women across this country for generations to come.”

Kelly Ayotte is facing a contentious race to keep her Senate seat this fall, which is understandable considering her record in New Hampshire includes voting to make college more expensive and voting to repeal health coverage for nearly 50,000 Granite Staters.

According to the polls, Ayotte’s dismal record of voting consistently to “defund” Planned Parenthood will have an even more negative impact on her already at-risk Senate race.

A survey conducted in 2015 by Hart Research shows that voters in the battleground state of New Hampshire strongly support Planned Parenthood, and oppose Ayotte’s position to “defund” the organization --- blocking patients who rely on federal funding from accessing preventive health services, including the cancer screenings and family planning services like birth control that Planned Parenthood provides to millions of women in communities across the country.

Key findings from the survey includes:

FACT: Kelly Ayotte is not doing more for women’s health.

Kelly Ayotte has an extensive record of voting against policies that would expand women’s access to the full range of health care services, which include votes to “defund” Planned Parenthood, which in New Hampshire — in addition to providing thousands of breast exams and thousands with birth control — administered over 13,000 STI tests, nearly 2,000 Pap tests, and engaged in sex education and outreach to nearly 2,000 individuals in 2013.