Each new year brings new accomplishments and new "firsts"-as we leave the past behind and break some boundaries on the way, whether it be in politics or in the culture at large. Sally Ride, the first woman in space, Marie Curie, the first woman to win a Nobel Prize, and Jeannette Rankin, the first woman elected to Congress in 1916. These folks help us think beyond what we may have thought was possible and inspire (dare?) us to dare to dream our own path forward.

Here are our nominees for the Boundary Breakers of 2013... 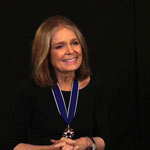 A champion for women’s rights in the United States, an icon of the feminist movement, and the co-founder of Ms. Magazine, the recognition that Gloria Steinem received this year for her lifetime of activism was simply awesome. President Obama bestowed upon Steinem the highest civilian honor in the U.S., the Presidential Medal of Freedom. During her acceptance speech, she acknowledged the importance of receiving this award not on behalf of her work, but on behalf of the entire feminist movement, "I’d be crazy if I didn’t understand that this was a medal for the entire women’s movement."

We agree. And we’ll keep on fighting to protect, defend and expand women’s rights, because as Steinem herself said,

If you say, I'm for equal pay, that's a reform. But if you say. I'm a feminist, that's a transformation of society 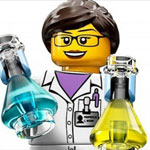 In a world when women and girls are both told we can do anything and given scant role models to help us dream, it was a big day for young girls who aspire to being scientists when Lego released the first female minifigure scientist: Professor C. Bodin.

The move is an important first step, addressing the lack of women in the sciences by encouraging young girls to play with Legos, while fighting the stereotype that girls aren’t “science-y”. Even though Professor Bodin may be small in stature, we’re betting she plays a big role in changing how the women of tomorrow think about what a “real scientist” looks like. 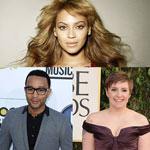 From John Legend to Beyonce to Lena Dunham, celebrities seemed to be coming out of the woodwork and proclaiming themselves feminists—which is pretty darn exciting.

At a press conference, John Legend not only identified himself as a feminist, but laid it out clearly why all men should be feminists.: “If men care about women’s rights the world will be a better place. We are better off when women are empowered—it leads to a better society.” Heck, yeah! As the creator, co-star and head writer of Girls, Lena Dunham has been both a role model and an outspoken advocate for women being who they are. And then there’s Beyonce, one of the most prominent women in the world. Beyonce shook things up in an interview with Vogue UK magazine, declaring, “I am a modern-day feminist. I do believe in equality. Why do you have to label yourself anything? I’m just a woman and I love being a woman.”

As icons with huge followings, their simple act of embracing feminists is a huge step for encouraging young women and men across the world to do the same! 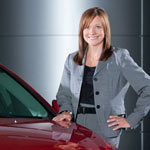 We just love this. In true evidence of how far we’ve come, General Motors named Mary Barra, as their new chief executive officer. She started out with the company 33 years straight out of high school, working part-time to help pay her college tuition. When she starts in this role, she’ll not only be the first woman to head a major automaking company, but a company in the top 10 of the Fortune 500! 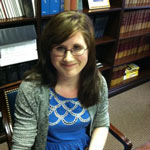 West Virginia high school senior Katelyn Campbell made a name for herself earlier this year when she spoke out against an abstinence-only sex ed assembly held at her school. Students were told “if you take birth control, your mother probably hates you,” but Campbell wouldn’t let that stand. In an interview with the West Virginia Gazette, Katelyn said, “West Virginia has the ninth highest pregnancy rate in the U.S.

I should be able to be informed in my school what birth control is and how I can get it.” Not everyone appreciated Katelyn’s comments, including the school principal, who threatened to call Wellesley College, where she had been accepted, and tell them that she had “bad character.” But Katelyn stood her ground and receiving support from thousands of strangers, including Wellesley College, which released a public statement (including on Twitter!) in support of Campbell. 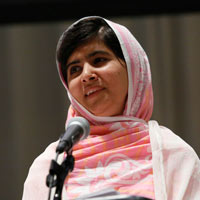 After being shot in the face and nearly killed by the Taliban for advocating that all girls, no matter where they live, should have the right to an education, Malala could have easily been silenced. She survived and she’s more determined than ever to spread her message on the importance of education. On her sixteenth birthday, delivered remarks in front of the United Nations on what was dubbed “Malala Day”.

"Terrorists thought that they would change my aims and stop my ambitions,” she said, “but nothing changed in my life except this -- weakness, fear and hopelessness died, strength, power and courage was born." Out of all the boundary breakers this year, Malala truly outshines for the sheer risk and bravery she demonstrated while standing up for what she believes.

Urge the Biden administration to repeal the Title X gag rule and ensure everyone has access to reproductive health care by submitting a comment today.