In the first three months of 2015, anti-abortion politicians introduced over 332 provisions that restrict abortion access. With such a wave of restrictions, you’d think the American people actually wanted these gynoticians interfering with women’s health care decisions.

Think again. A survey by Vox shows what we’ve known for a long time: Most Americans support a woman's right to access abortion safely, and without hardship. What else Americans agree on may surprise you. 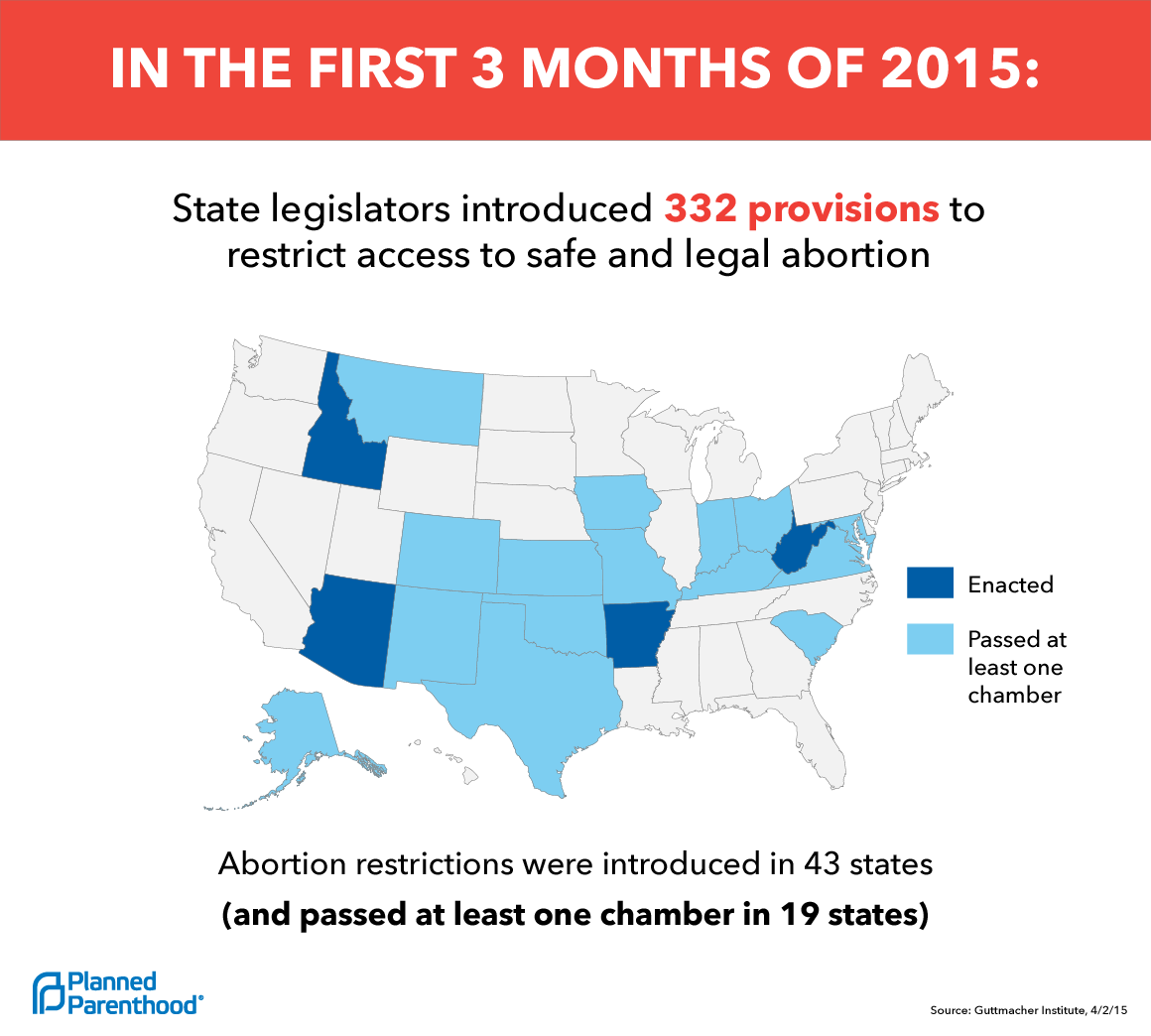 Agreed: Most Americans Are Not ‘Pro-Life’

Political pundits often frame public debate over abortion policies with black-and-white labels, pitting “pro-life” against “pro-choice.” But individuals have myriad gradients. This matters because, to quote Vox’s Sarah Kliff: “...by ignoring that gray space, we miss something important: There are abortion policies that a majority of Americans could agree on.”

Working with research firm PerryUndem, Vox polled 1,067 adults nationwide about their thoughts on abortion. The survey, conducted in March 2015, found that only 26 percent of respondents identified as strictly “pro-life,” while a sizable 71 percent of respondents identified as fully or partially “pro-choice” or didn’t identify with one of those labels at all. 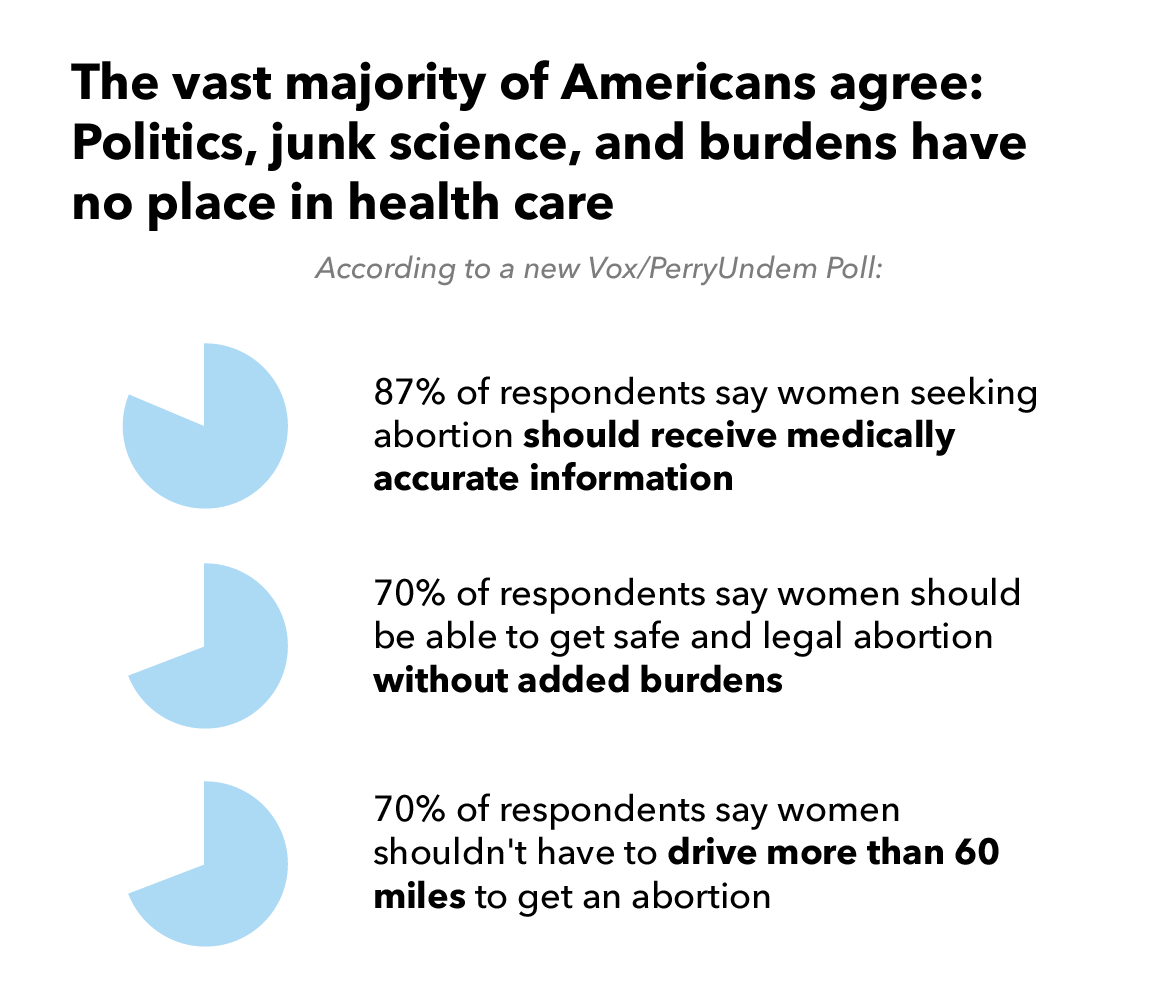 The poll shows what we’ve known for a while: The “pro-choice” and “pro-life” labels don’t really reflect the complexity of the way that Americans think and talk about abortion. That’s why Planned Parenthood uses the term "anti-women's health" to describe certain political attacks on access to reproductive health care services, including abortion.

Agreed: Women Should Get Accurate Information About Abortion

Here’s one of the areas on abortion with the most agreement: A whopping 87 percent of poll respondents said that a woman seeking an abortion should receive medically accurate information.

Let’s repeat that number for all the gynoticians out there: EIGHTY-SEVEN PERCENT. With overwhelming consensus like that, you’d think all lawmakers would stop forcing misinformation down women’s throats — but no. Just look at these examples:

Agreed: A Woman Should Get Supportive Abortion Care Without Added Burdens

When asked about women’s personal experience when having an abortion, respondents put safety and comfort first. Seventy percent of respondents said women should be able to get safe and legal abortion without added burdens. More than 70 percent asserted that the process should be “supportive,” “non-judgmental,” and “comfortable.”

And yet, gynoticians in states like North Carolina are trying to add medically unnecessary restrictions that are designed to shame and demean women seeking abortion. One of those restrictions would triple the waiting period for a woman seeking an abortion from 24 to 72 hours — the definition of an added burden.

Agreed: Abortion Should Be Accessible Within a Reasonable Drive

Gynoticians across the country also are trying to restrict women’s access to abortion by making it geographically difficult to access. The sad fact is that when women’s health centers close, women may have to drive hundreds of miles to get the care they need — just look at what happened in Texas in October 2014. That’s not how it should be, according to poll respondents: 70 percent of respondents said women shouldn't have to drive more than 60 miles to get an abortion.

Vox’s Kliff talked to the people who took the poll and found that “even though they come from different backgrounds and live in different states and hold different views, they have way more in common with one another than most of us realize.”

So if abortion policy is a space where the public can agree, and if a majority of Americans wouldn’t want to get in the way of a woman’s access to abortion, then who do all those gynoticians really represent?

Not us. And not you either, we’re guessing. So, do something about it: Tell these gynoticians to leave women’s health up to the real experts — women and their doctors. Period.