Vox's Liz Plank shows that most Americans know little about how safe a procedure abortion really is and how the anti-abortion movement exploits this lack of information.

Although it's is a divisive topic, what unites people on both sides of the debate is how clueless they are about the specifics of abortion. Vox's Sarah Kliff reported earlier this year that most Americans, regardless of their gender or political leanings, believe the medical procedure is rarer and more dangerous than it really is.

Approximately 61 percent of the 1,060 people polled by Vox and PerryUndem underestimated the prevalence of abortion. And a majority said abortion is "less safe" or "about as safe" for a woman as giving birth — in reality, giving birth leads to many more complications. In fact, for every 100,000 live births in the US, nearly nine women died, according to a 2012 study published in the Journal of Obstetrics and Gynecology. Per every 100,000 abortions, 0.6 women died, according to the same study. 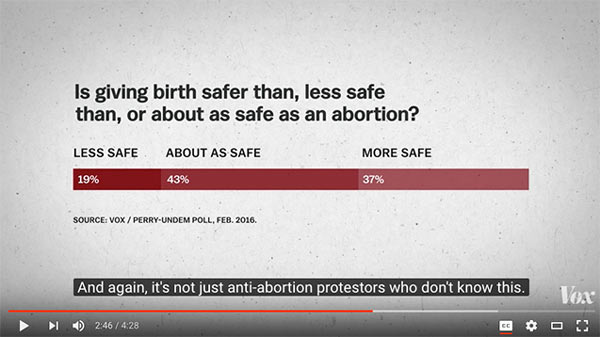 The abortion knowledge gap has created the perfect breeding ground for anti-choice legislation focused on "safety." In fact, Phelps noted, Texas's controversial HB2 law was supposedly written to make abortion facilities safer, but it's only led to clinics being forced to shut down since they fail to meet the law's new standards.

Read the full article on Vox