On March 4 hundreds of advocates for health care access rallied on the steps of the U.S. Supreme Court as justices heard oral arguments in King v. Burwell, a case that challenges a core component of the Affordable Care Act (ACA) that helps women and families afford health care coverage. In fact, 4.1 million women are at risk of losing access to affordable health care coverage in this case. That’s why Planned Parenthood joined together with ally groups to spread the word that health care is a human right.

Planned Parenthood supporters including Adrienne McLean, 26, from Indianapolis, Indiana, and Delma Limones, 22, a college student from Austin, Texas, shared their personal stories about how their lives could be impacted if the court rules the wrong way in this case.

Delma Limones, 22, a college student from Austin, Texas, has health insurance for the first time in four years as a result of the ACA. She pointed out that Latinos in Texas comprise one of the highest uninsured groups in the nation.

"Health insurance should not be a privilege — but a right for all."

Adrienne McLean, 26, from Indianapolis, Indiana, was allowed to remain on her parents’ plan until she turned 26. Now she has her own Marketplace plan, which she is able to afford because she receives a $175 tax credit. Adrienne works part-time as a medical assistant for a small private practice, receiving an irregular income, so is not able to afford health insurance without the ACA financial assistance.

Planned Parenthood and our supporters rallied alongside allies from the National Latina Institute for Reproductive Health, the League of United Latin American Citizens, NARAL Pro-Choice America, SEIU, the Center for American Progress, and Families USA — just to name a few.

The outcome of King v. Burwell could have a potentially devastating impact on women, especially women of color. All told, about 9.3 million people are eligible for premium tax credits in 34 states in the federal Marketplace and at risk of losing affordable health insurance if the Court rules in favor of King.

Over 4 million women — including 1.4 million women of color — who have enrolled in affordable Marketplace coverage are at risk of losing that coverage, including basic health care such as routine doctors’ visits, affordable birth control, maternity care, cancer screenings, and other preventive care (see “Table 1” below).

Of the 9.3 million people at risk of losing financial assistance, about one-third (3.2 million) are people of color, including 1.5 million Hispanics and 1.2 million African Americans. Another 495,000 individuals in other communities of color would lose premium subsidies and access to affordable coverage if the Court ruled in favor of King. 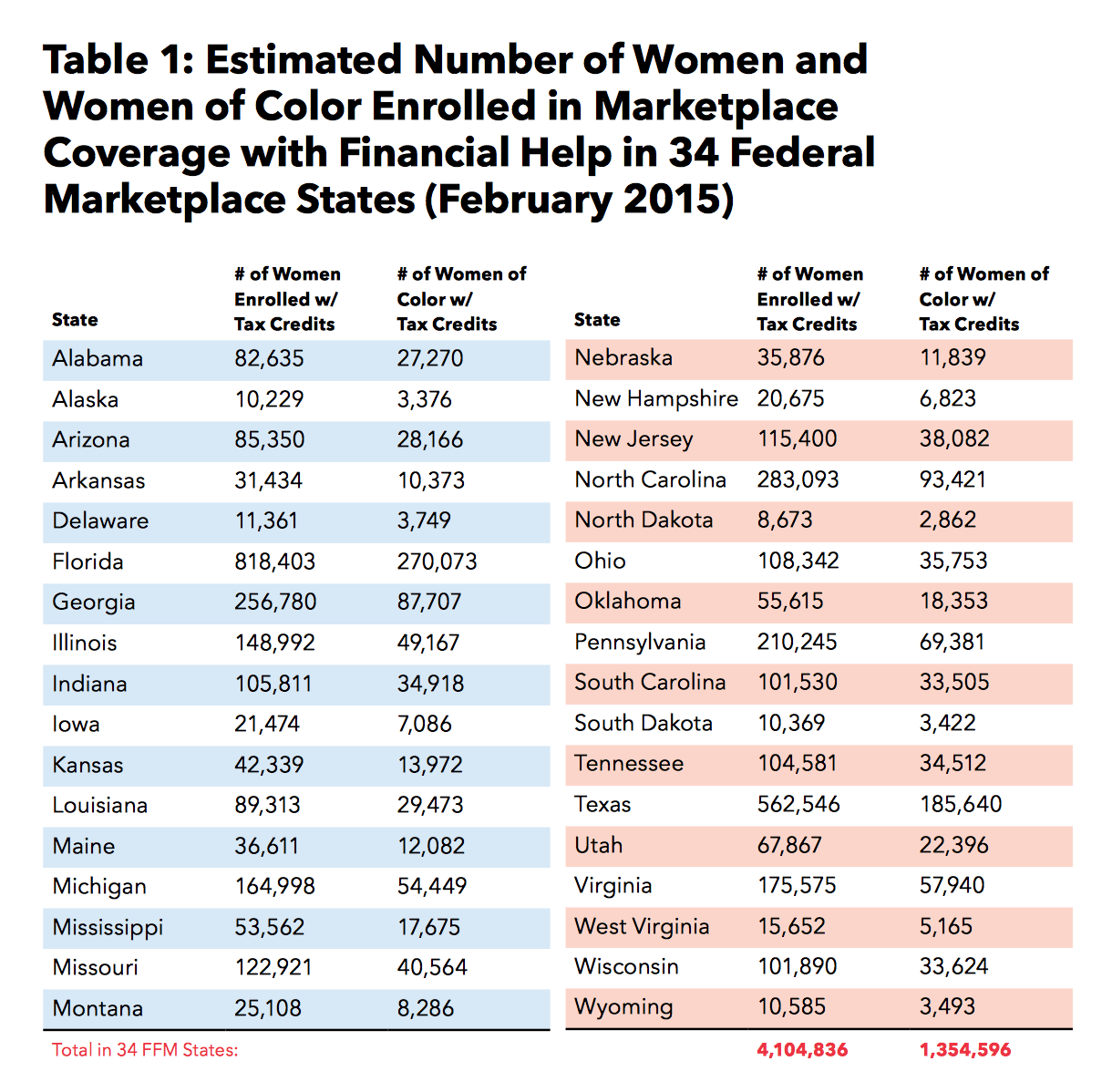 Ways to Get Involved

Missed the rally? Don’t worry. There are still ways that you can follow the conversation and speak out in support of health care access for all.