It’s been three years since Obamacare, aka the Affordable Care Act, aka the health care law, was signed into law, and already millions of women, families, and young people are benefiting from it.  And yet, the fight seems to be getting all the attention.

You’ve heard this one before: politicians in Congress are getting ready for another attempt to repeal Obamacare (seriously. It’s scheduled for Friday).  They grab headlines with their over-the-top soliloquies on how “Obamacare isn’t working,” but they couldn’t be more wrong.  They should tell that to the 27 million women who have ALREADY benefitted. And maybe they should tell that to this supporter who sent us her photo of her birth control without co-pay. 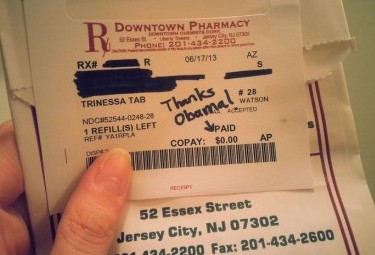 Obamacare is working, and as the benefits for women’s preventive care offered under the law continue to roll out, millions of women will gain access to health care and be able to lead healthier lives.

The real story of Obamacare is the historic progress that has been made for women’s health—the real stories of real people who have already benefitted from the law and those who stand to benefit.

So why do we love Obamacare? Let us count the ways….

Because of Obamacare, women and families will be able to lead healthier lives. It’s more health care for more women—and it’s health care that’s there when you need it.

We need to stand up and help make sure every woman and her family can access the care they deserve. Sign on to send a clear message to these anti-women’s health lawmakers: Obamacare works and we’re not going to stop fighting to protect it.