We’ve seen big wins in the Supreme Court this month, but June 2014 wasn’t so celebratory for women: Today marks the one-year anniversary of the U.S. Supreme Court’s Hobby Lobby ruling. At the time of the ruling, 250,000 women’s health advocates joined Planned Parenthood’s dissent, wrote letters to Congress, and called their senators in protest. Why? It’s been a whole year, so you might need a little reminder: The ruling gives bosses at closely held companies, which employ more than half of the U.S. workforce (including tens of millions of American women) a free pass to discriminate and deny their employees coverage for  affordable birth control.

Two out of three women voters say that politicians who support the Hobby Lobby decision are out-of-touch with them and their everyday lives.

It’s plain to see how little regard the Supreme Court justices who wrote the decision — and the politicians who agree with them — have for women’s basic health care: The majority opinion barely mentioned women at all, and it was signed by five men who have never had to worry about paying for birth control, or how family planning will impact their next paycheck. Of course, anti-women’s health politicians have cheered the ruling since it came down a year ago.

That brings us back to today, when Republican candidates for the 2016 presidential election — from New Jersey governor Chris Christie (who is expected to announce his candidacy today) to former Florida Governor Jeb Bush — are standing by the same out-of-touch views on birth control access. You won’t believe just how out-of-touch those views are.

To show how out-of-touch THEY are, let’s get in touch with where WE are: In just the past few weeks, thousands of women and men have taken to Twitter to join Planned Parenthood’s #BirthControlHelpedMe movement. The message is undeniable.

The outpouring of support for birth control isn’t just about birth control — it’s also been about access and affordability. Over 55 million women are now eligible for birth control without a copay, a benefit that saved women $483 million on birth control pill prescriptions alone in its first year. And women want to keep this benefit — just read the #BirthControlHelpedMe stories from women who tweeted about why birth control access is worth fighting for. 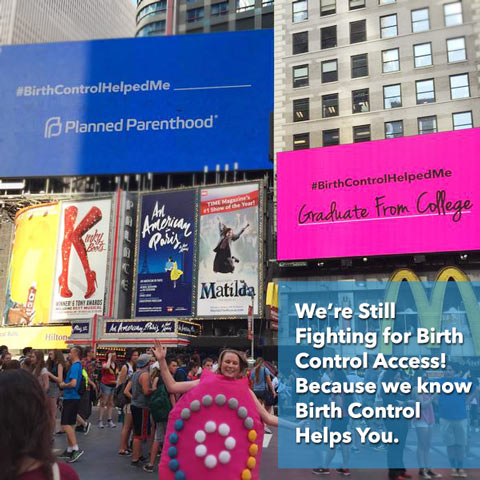 Just to underscore where the vast majority of women stand, check out these poll results from last year:

GOP Candidates Stuck in the Past on Birth Control Access

While women and men across the country are sharing how birth control has helped them, the majority of GOP presidential hopefuls have records of restricting access to birth control.

We couldn’t fit all the out-of-touch things these candidates have said about birth control access, but you’ve got to read our top four:

Christie was asked if he was concerned that some New Jersey women could lose birth control coverage, to which he said: “No.” When asked why not, he added, “Because I’m not.”

Fiorina said that women “had plenty of access to birth control both before and after” the Supreme Court’s Hobby Lobby decision, dismissing the impact that this case had on women who can now be denied birth control by their employers.

Mike Huckabee on the contraception mandate in the Affordable Care Act: Like the vast majority of GOP presidential candidates, Huckabee opposes the benefit that ensures that all women can access birth control with no copay. We’ll never forget the day when he said:

“And if the Democrats want to insult the women of America by making them believe that they are helpless without Uncle Sugar coming in and providing for them a prescription each month for birth control, because they cannot control their libido or their reproductive system without the help of the government, then so be it.”

Politicians who support Hobby Lobby are focused on the wrong issues and the wrong priorities. They have a backward vision on women’s health and rights at a time when women refuse to go back to the days of paying up to $600 a year out-of-pocket for birth control.

So, if you see Conservative candidates spout out a heap of rhetoric to cheer on Hobby Lobby, share your birth control story loud and proud. Say why #BirthControlHelpedMe in the face of those who would take away your access.