And that’s exactly what we did.  This weekend, while Fiorina was campaigning in Iowa, PPVI supporters — including patients — were on hand to correct the record and tell the truth about the essential health care services Planned Parenthood provides.

If Carly wanted to listen about the facts, we had plenty of patients with stories to tell.

Like Quinn, who has always chosen to receive health care from Planned Parenthood because they provided compassionate, respectful care when she needed it most. She brought her best friends and her pastor to stand with her as she told her patient story publicly for the first time.

Like Hannah, a Grinnell student who wanted to tell Carly that at 19, she knew enough to demand honesty from her politicians.

Like Rebecca, a Waterloo resident who grew up in an era when there was no access to safe and legal abortion — and isn’t about to go back.

Like Tad and his daughter Mija, who are passionate about standing up for an organization that has so often been the subject of baseless attacks.

Carly didn’t listen to these stories. I was lucky enough to hear them, and I was proud to stand with them and call out Carly’s repeated lies and willful ignorance.

As we told our stories and brandished our signs, we accomplished more than calling attention to Carly’s lies. We demonstrated that Planned Parenthood is strong because of the millions of people the organization has touched and the stories they have to tell. They are not intimidated by the fear-mongering of candidates like Carly Fiorina, but united by the commitment they have to their communities and to the health care that Planned Parenthood provides.

Her lies are no match for the Planned Parenthood Truth Team. 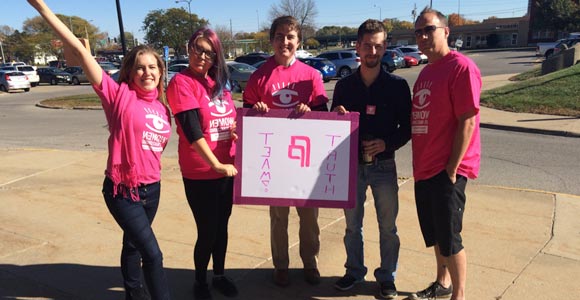 Fiorina had a town hall in Waterloo, IA, and PPVI supporters (the “PP Truth Team”) were there to ask Fiorina if she is ready to admit that she is lying and to tell the truth about Planned Parenthood.

Kate Kight is a grassroots organizer in Iowa helping to connect Planned Parenthood volunteers with opportunities to make their voices heard around the state.