Guys, It’s Not a Game Show

It’s almost as if anti-women’s health lawmakers are trying to guess at the correct number of weeks to win a prize. Guys, it’s not a game show. You won’t see flashing lights and hear clanging bells if you pick the magic number.

The Supreme Court was clear in Roe v. Wade that states cannot ban abortion. This isn’t complicated. As the ACLU and the Center for Reproductive Rights argued in Arkansas, this is “settled United States Supreme Court precedent.”

Courts have stopped the 12- and 6-week bans in Arkansas and North Dakota — for now. In North Dakota, a federal judge ruled that the six-week ban stood “in direct contradiction to a litany of Supreme Court cases” on abortion, and another judge reiterated that “a woman’s constitutional right to terminate a pregnancy before viability has been recognized by the United States Supreme Court for more than 40 years.”

Their Lawsuits Cost a Lot of Money

This is more than just a constitutional question about basic rights. The lawsuits over abortion bans and restrictions cost taxpayers money — a lot of money. To defend anti-abortion laws, taxpayers in six states have paid more than $3.5 million. That’s $3.5 million that ultimately came from taxes. Think about it this way: Taxpayers like you are footing the bill for politicians to defend the laws they cooked up to hurt women’s health care. 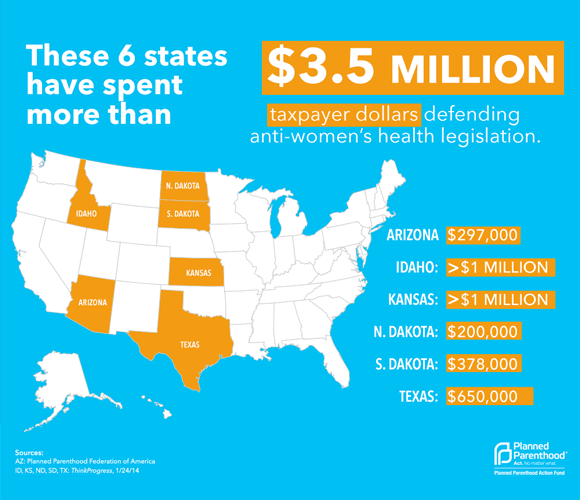 Now the lawsuits over the new legislation could cost taxpayers (that’s political speak for “you and me”) even more than that. South Dakota estimates that defending its abortion ban could cost between $1.7 million and $4 million. And North Dakota has set aside $400,000 to defend its abortion ban.

There Are Better Ways To Spend Your Money

We’re not trying to say that these politicians are pushing anti-abortion laws to enrich lawyers. We’re saying there are about 3.5 million better ways to spend this money.

Politicians Think They Know Better Than Your Doctor

First — and we really shouldn’t have to keep repeating this — but Americans want their elected officials to do their jobs, not to micromanage abortion laws. In a 2014 poll by Greenberg Quinlan Rosner, 68.7 percent of voters wanted government not to interfere in a woman’s private decision about whether to have an abortion. These days, you can’t get 68.7 percent of everyone in Fenway Park to agree to root against the Yankees. Yet, even on something as contentious as abortion, Americans of all political stripes and persuasions agree that it’s time for government officials to stop pretending that getting elected means they’re qualified to rewrite medical regulations.

There are some specific reasons why these specific abortion bans are bad ideas. Abortion later in pregnancy is extremely rare, but when it does happen, it is often due to complex circumstances like severe fetal abnormalities and serious risks to the woman’s health — the kind of situations where a woman and her doctor need every medical option available.

We know what they want to do by banning abortions after 20, 12, and 6 weeks. They. Want. To. Ban. Abortions. Abortions that are now legal and safe.

Want to Improve the Economy? Invest in Family Planning.

Here’s a thought. If they want fewer abortions and to back up the lip service they pay the economy, how about funding family planning services? Birth control not only prevents abortions, but it saves taxpayers money. For every public dollar invested in family planning, taxpayers save $7, according to a bunch of smart people at the Guttmacher Institute:

It’s not hard to understand why that’s the case. Low-income women are at the highest risk of unintended pregnancy, largely because they don’t always have access to medical resources like contraception. But, when publicly funded programs like Title X help those women get affordable birth control, it can make a big difference. Guttmacher researchers estimate that the care provided at publicly funded family planning clinics helped prevent 2.2 million unplanned pregnancies in 2010.

With so many fewer pregnancies among this population, appropriating funding for family planning works out to be very good deal for the government. It eliminates a significant amount of potential Medicaid spending, since states don’t have to pay as much for abortions, for miscarriages, or for maternity and infant care. “This investment resulted in net government savings of $13.6 billion in 2010, or $7.09 for every public dollar spent,” the researchers conclude.

Every dollar spent prevents $7 worth of Medicaid spending on abortions, miscarriages, births, and infant care?

More Access to the Pill = More Success Later in Life

It gets better. Women who have access to the pill at a younger age are TWENTY percent more likely to go to college and make more money later in life. According to a study on early access to oral contraceptives, younger teenagers are more likely to choose to attend college as well as earn higher wages over their extended lifetime if they incorporate the pill into their daily life.

That’s not all. Over a lifetime in the workplace, women earn 3 percent more for each year they put off having a child. That means deferring first childbirth by four or five years can have a resounding impact on one’s overall income. Beyond the initial child, a woman’s control over the spacing of additional children due to birth control allows her greater access to education and career-focused opportunities, as well as higher wages in the long run.

The Pill Is One of the Greatest Recent Economic Innovations.

The pill was responsible for about one-third of the increase in annual earnings among the first groups of women to gain legal access to it. That’s why Bloomberg named the pill one of the greatest economic innovations of the last 85 years.

It stands to reason that giving half the population greater control over their lives would result in greater economic opportunities, thus growing the economy. A growing economy means a bigger tax base that can spread the tax burden more evenly and provide more money for schools, roads, and tax cuts — not less.

So far, so logical.

But This Next Thing Will Blow Your Mind.

Children born to parents who had greater access to birth control pills enjoy a 2-3 percent increase in their own income as adults. In fact, the children of women who had readily available access to the pill have a 2-7 percent higher chance of finishing college.

So we’ve got two roads, diverging in the wood as it were. One leads away from what Americans want — it would ban safe and legal abortion, and run up massive legal bills that you and I have to pay. The other one puts women in charge of their own lives, and it means they end up with more opportunities to advance in their careers and make contributions to society — and that includes raising better educated and more successful families.

Which do you think we should be doing?