If you want to see the result of Republican leadership's devastating attacks on women's health, look no farther away than Texas. This timeline reveals how low the Texas legislature has sunk in just the past five years, and how hard we need to fight to win back reproductive health care access for Texans.

The first big blow to Texans’ reproductive health in the past few years was when Gov. Rick Perry approved massive funding cuts to women’s health programs. In September 2011, Texas slashed funding for the state's family planning program by a whopping two-thirds. The legislature also started a tiered funding scheme that essentially blocked family planning providers like Planned Parenthood from the small amount of funding that remained. The consequences of these budget cuts, two years later:

2012: Texas Walks Away from $40M in Federal Funds to Exclude Planned Parenthood

To circumvent federal law preventing Texas from denying women access to qualified providers like Planned Parenthood, state lawmakers in January 2012 dismantled the Medicaid Women's Health Program. In doing so, they rejected about $40 million in federal matching funds, which covered 90% of the program's cost.

In place of the federal Women’s Health Program, lawmakers decided to launch a fully state-funded program — which excludes Planned Parenthood health centers (which, incidentally, had served 40% of the women in the federal program). By 2013, the impact of this decision became clear: nearly 30,000 fewer women received birth control, cancer screenings, STD tests, and other care through the program. 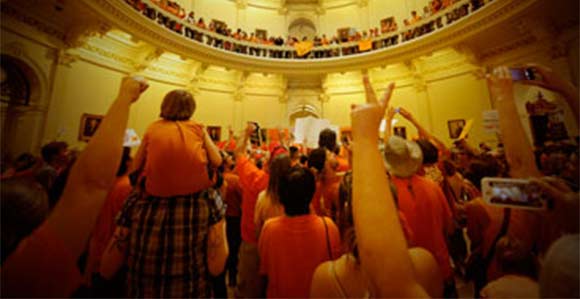 The summer of 2013 saw a big fight to stop an extreme and dangerous anti-women’s health law (HB2), a controversial package of bills that severely restrict access to abortion. Governor Rick Perry and his cronies rammed the bills through the legislature after two special sessions, a citizens filibuster, and a Texas-sized standoff. They did it despite Wendy Davis’ renowned 11-hour marathon filibuster... and despite the fact that thousands of Texans across the state rose up to oppose it. This law is now being challenged in the courts and could go before the Supreme Court next year.

Within hours of the HB2 restrictions taking effect in October 2014 (and before the Supreme Court stepped in to temporarily block the restrictions), Planned Parenthood witnessed the catastrophic impact on women across Texas:

This past June, Texas Gov. Greg Abbott passed a budget that bans Planned Parenthood from the state's Breast and Cervical Cancer (BCC) Services program, which provides  vital cancer screenings to low-income and uninsured women. Abbott made this move despite the fact that in some Texas communities, Planned Parenthood is the only provider of BCC services — and despite receiving nearly 20,000 petition signatures from Texans all across the state. Sadie Hernandez, a 20 year old Brownsville native, delivered those petitions and stood vigil for three weeks outside the governor’s mansion in opposition to the ban.

Health centers in Texas are now struggling to meet increased demand for safe, legal abortion following that wave of closures after the passage of abortion restrictions in 2013. Harsh, medically unnecessary restrictions are forcing abortion later in pregnancy, if a woman can access a procedure at all.

What’s Next for Texas?

If the Supreme Court allows all of Texas’ 2013 restrictions to go into full effect, the consequences for women would be devastating:

Here’s what you can count on: While politicians work to create a Texas where women have nowhere to turn for safe, legal abortion or basic reproductive health care, Planned Parenthood isn’t going anywhere.

“It’s clear politicians think they can bully us out of caring for Texans in need. Planned Parenthood will not be intimidated, and you cannot close our doors.”