This Thanksgiving we all had a little more to be thankful for as the president announced his executive action on immigration on November 20. Unfortunately, Republicans have already voted to try to dampen our holiday spirit and block the president’s brave and rightful action, rather than introduce a comprehensive and positive bill to address our country’s immigration system.

As a reproductive health care advocate in the Latino community, I was heartened to hear President Obama’s action on immigration during his visit at Del Sol High School, here in Las Vegas, Nevada. His announcement brought back memories of how my parents came to this country. Because I was born here, I could petition for their legal residency. I have seen how the nation’s broken immigration system has impacted people like my parents, who came to this country seeking a better life, and I know the president’s action is a great step in the right direction toward repairing that system. 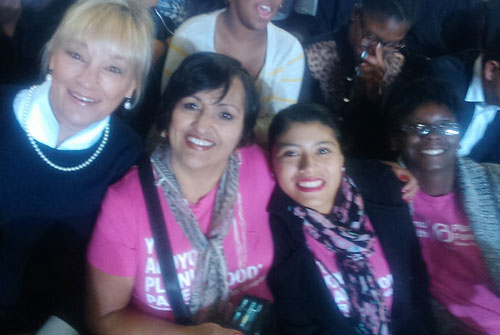 When I think of the people in my community and the many immigrant patients that Planned Parenthood serves, I know the president’s action does not go quite far enough on one important issue: access to affordable health care.

Due to lack of access or an inability to afford care, in my community, people are still self-medicating, going to unlicensed “doctors,” and putting themselves and their children at risk when they cross the border to get unmarked drugs without proper instructions or ongoing care. Sadly, it is not uncommon to hear stories of women being sent to the emergency room after a failed abortion attempt at a so-called “clinic.” 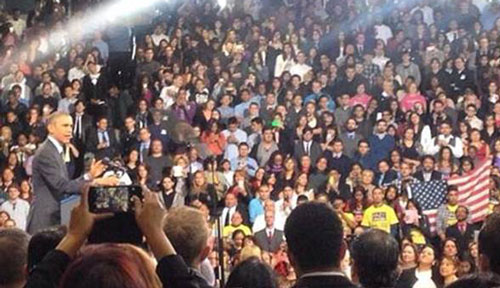 Photo: President Obama addressing the crowd at visit at Del Sol High School about his action on immigration reform on November 20, 2014.

Beyond all else, President Obama’s executive action does good things. It protects families of undocumented immigrants from being torn apart. It gives peace of mind to millions of people who have lived in constant fear of deportation.

As I went out this week to meet with families, our platicas (get-togethers) shifted from discussions on reproductive health to wonders about “maybe I qualify” or hopes like, “soon I will be able to see my mother who I have not seen in many years.” For many it means getting out of the lowest paying jobs, and being able to afford a better life and improve their health. And for that, I say: Se lo agradezco (I'm grateful to you), Mr. President.

Advocating for the Health of Immigrants and the Latino Community

As part of my job, I go out with my Promotores de Salud (Spanish-speaking community health workers) and talk to Hispanic, economically disadvantaged women about sexual health and family planning, and refer them to providers. There is not one day that we don’t hear stories of fear of deportation, relatives being deported, and people postponing needed exams for lack of insurance or money to pay for them. That also means we have seen firsthand how immigration status can hurt people’s access to affordable health insurance — which makes the missing piece of the president’s action all the more glaring.

The executive action does so much, but undocumented immigrants still cannot get Medicaid or purchase affordable insurance through Obamacare, even with their own funds. Such prohibitions on federal health benefits are partly to blame for the high rate of uninsurance among immigrants. Poor women face the worst of it: approximately 60 percent of low-income immigrant women lack health insurance.

I believe that your access to health care should NOT depend on your citizenship. That’s why Planned Parenthood — the nation's leading women's health care provider and advocate — keeps its doors open to people who need care, no matter what their citizenship status is, no matter where they live. At the same time, it’s unfair that aspiring citizens who pay taxes (including taxes that actually pay into the health care system) can’t get public health benefits. Many people we talk to want to buy insurance for their kids first, and then, cuando se pueda (when it is possible) for the adults. Many of the families I work with every day remind me of my parents. All they want is to work without fear of deportation, see their children get the education they did not receive, be healthy, and give back to this country that is now their home.

As I write this, I am proud to say I saw my parents’ dreams come true, so now it is time for me to help make others’ dreams come true also. Working at Planned Parenthood I have the opportunity not only to connect those families to affordable health care but to also loudly advocate for changes in policy that impact them.

We need an immigration system that gives all aspiring American citizens a fair pathway to citizenship and access to affordable health care.  I am joining the many people across the nation in calling on Congress to build on President Obama’s bold step forward and allow this nation of immigrants to have a holiday filled with hope and dreams of staying reunited as families.

To our current and incoming members of Congress, I say: Now is your time to meaningfully expand access to health care. Now is your chance to make the next generation our healthiest generation.

Rosita Castillo is a Promotores de Salud Program Manager from Planned Parenthood of the Rocky Mountains in Las Vegas, Nevada.