This year we’ve seen an all-out assault on safe and legal abortion in this country. You can bet it’s on the ballot this election. Why? Because the leaders we elect will have the power to fight back against attacks on safe, legal abortion — or make those attacks even worse.

We’re already in a precarious position when it comes to safe, legal abortion access: Just this year, Congress has taken 18 votes to restrict women’s access to health care, including abortion. Meanwhile, state politicians have pledged to try to block women, men and young people from accessing Planned Parenthood’s health care services, including abortion.

What’s more, the Supreme Court is taking up the biggest abortion case we’ve seen in decades — the decision will come just a few months before Election Day 2016, and it could effectively end access to safe and legal abortion.

There’s no question: Abortion access is at stake at all branches of government at the state and federal levels. That’s why we’re watching where the presidential candidates — and voters — stand on the issue.

Did you know that the majority of Americans support access to safe, legal abortion? It’s true, and it has been for a while. In fact, a recent Bloomberg Politics national poll found that 67% of Americans said Supreme Court was right to rule that women have a constitutional right to abortion in Roe v. Wade.

A survey by Vox shows another thing we’ve known for a long time: Most Americans support a woman's right to access abortion safely and without hardship. In addition, more Americans consider themselves pro-choice than pro-life: A sizable 71% of respondents identify as fully or partially “pro-choice” or don’t identify with one of those labels at all.

While some presidential candidates get the hint that Americans support access to safe and legal abortion, others would put that access seriously at stake.

All the leading GOP presidential candidates are promising to push policies intended to end access to safe, legal abortion — with the intent to ultimately ban it. If you want to see what they’d do as president, just look to what these three candidates already have said and done:

Marco Rubio has worked to ban safe and legal abortion, even in cases of rape and incest.

In every single session he’s served in Congress, Sen. Rubio introduced a dangerous bill that intrudes on young women’s access to safe and legal abortion. He also used kittens and donkeys to underscore his extreme stance and said he’s against abortion "even if 100 percent of my constituents were for it."

John Kasich has made Ohio one of the hardest states to find abortion providers.

He even secretly worked to craft extreme and cruel provisions that would ban access to safe, legal abortion in Ohio — provisions that played a key role in shuttering half of Ohio's abortion clinics.

Jeb Bush has made a career out of inserting himself into women and girls’ personal medical decisions.

As governor of Florida, he aggressively intervened in two cases to prevent a developmentally disabled rape victim and a 13-year-old girl from accessing safe, legal abortion. He also made Florida the first state to fund so-called crisis pregnancy centers (known to demean and lie to women seeking abortion) through the sale of “Choose Life” license plates.

What do we stand to lose if candidates like these end up in the White House? Too much.

We want an America where everyone gets the health care they need — no matter what. To make that vision a reality, we need to elect a president who boldly supports access to safe, legal abortion.

Hillary Clinton, who has been a lifelong champion in her support for abortion access.

In the Senate, Secretary Clinton worked to beat back attacks on safe and legal abortion, and to ensure that low-income women and those serving in the military had access to it. Secretary Clinton supports public funding for abortion because, as she said, it’s about “ensuring that poor women, like wealthy women, have access to the full range of affordable, safe and effective reproductive health care services, including abortion." Her support for abortion access also has been loud and clear in her 2016 campaign. There’s no question that she would protect and expand abortion access as president.

Bernie Sanders, who has voted in Congress to allow women to travel across state lines for abortions and in support of federal funding of abortion.

Sen. Sanders describes his position on abortion clearly: “We are not returning to the days of back-room abortions, when countless women died or were maimed. The decision about abortion must remain a decision for the woman, her family and physician to make, not the government.”

Martin O’Malley, who worked to protect women’s access to legal and safe abortion across the state of Maryland.

On the issue of abortion, O’Malley told the Catholic Review: “I believe that it is an issue that is best left to the individual conscience of women, and in the meantime, as a society, we should do those things that we can to advance the dignity of every human life.”

So that’s what we stand to lose: This potential for safeguarding abortion access.

Where all the Presidential Candidates Stand on Safe, Legal Abortion

We have a clear message for candidates who have threatened access to reproductive health care, who think having to drive hundreds of miles to safely access a legal abortion isn’t a burden, and who have made offhand comments about eliminating basic health care for millions across the country: You’re about to be in for a very rude awakening.

Reproductive health voters are educating themselves on where the candidates stand, and they’re going to keep these candidates accountable at the polls. 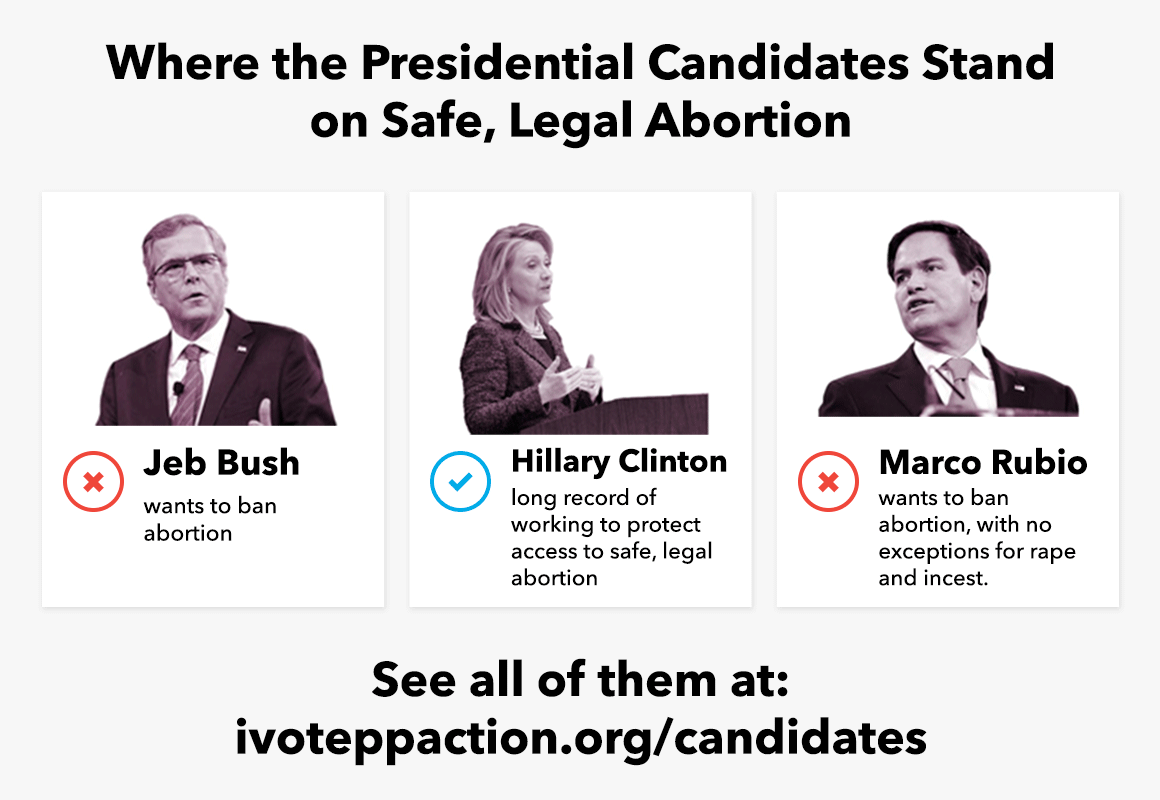 Want more than the examples above? Here’s where all the presidential candidates stand on safe, legal abortion:

See a full overview of where the presidential candidates stand on all of the most important issues for reproductive health.