#WeArePP: Our Stories from AK to AZ is a blog series in which we profile supporters and advocates from across the country and every corner of our Planned Parenthood community. This week we caught up with Jonas Creason, a Virginia resident, Planned Parenthood supporter, and activist.

Meet Jonas Creason. About seven years ago, he was making the trafficky, hours-long round trip between Charlottesville, Va. and Richmond, Va. every two weeks — just to get health care.

At the time, there was no place for transgender patients like Creason to receive care in Charlottesville, where he was an undergraduate at the University of Virginia.

“I started taking the bus out to Richmond because there was a free clinic there that saw trans patients,” Creason said. “I got prescribed hormones there, and so I continued making this commute.”

Uninsured and lacking closer options, Creason had no other way to access the care he needed. His initial transition needs required bi-monthly visits to his provider. He recalls carefully planning his travel and doctor’s appointments around classes. And it wasn’t easy.

“There were definitely misadventures. One time, I missed my bus and had to sleep in the Greyhound station. If my appointment went late, or if my bus left early, I’d be in trouble.”

After a couple years, Creason was able to get health insurance. But due to the Richmond clinic’s policy, this disqualified him from receiving care. Instead, he started going to an endocrinology Clinic in Charlottesville, where he had a “terrible experience.”

“None of the doctors who worked there had seen a trans patient before,” said Creason. “I got misgendered a lot. I had to explain to them how they should be caring for me.”

Creason sought care at a nearby health center for teens next — a much more affirming environment with “great staff” and a program for young trans patients. Still, though, he faced hurdles in getting care. Although this health center provided the right health care, Creason’s insurance didn’t cover it. And the out-of-pocket costs were extremely high — a huge undertaking for Creason, who at that point had recently graduated.

“I went into a considerable amount of debt — but I couldn’t not go to the doctor,” he said.

Soon after, Creason learned about a new trans health program — an affordable one.

“A friend of mine who works at the Planned Parenthood clinic in Richmond told me that they had just started initiating a trans program there,” Creason said. “I called them up and made an appointment.”

Now, Creason only goes to Richmond about every six months for necessary care. And he’s not the only one. In its first year, the Virginia League for Planned Parenthood cared for 500 trans patients, including some who travel from other parts of Virginia and even other states.

For the first time in seven years, getting health care is not a burden for Creason.

“At [Planned Parenthood], I get really good, focused care that I can afford,” he said. “It’s a lot less stressful for me, to say the least.”

Read more from our interview with Jonas below.

Planned Parenthood Action Fund: I’m so, so happy to hear that your health care needs are being met.

Jonas Creason: Yeah! My Planned Parenthood clinic is great. They know how to help me. For example, a couple weeks ago I was doing my testosterone shot and I got a muscle spasm. They were able to talk to me right away, and they taught me how to do my shot differently to prevent muscle spasms from happening again. It’s a huge difference to have access to people who can help me — as opposed to scrambling around to find care.

PPAF: Misgendering is a big issue for trans and non-binary communities. What do you think society can do about this?

JC: First and foremost, [misgendering] is very insulting. It’s basically a doctor, or whoever, assuming that they know better than you. Because if someone says, “Hey, I go by these pronouns, this is how I feel,” it’s kind of just blatantly disrespectful to ignore all of that.

Asking for a person’s pronouns helps cut down that issue, especially non-binary people who go by ‘they/them’ pronouns. I know a few non-binary people who feel really awkward asking others to use ‘they/them’ pronouns because they’ve gotten so much speculation. Believing people when they tell you how they feel and respecting how people ask you to treat them goes a really long way.

PPAF: When you were at UVA, what sort of activities did you participate in?

JC: When I was in college, I was in this group called QAAA (Queer and Allied Activism). We worked on things like gender-neutral bathrooms, which was huge for me. When I first started transitioning, before I started hormones, I didn’t feel comfortable using bathrooms on campus. It got to the point where I just wouldn’t go all day — I ended up getting a kidney infection and having to go to the hospital. So QAAA worked on making a map of the unisex bathrooms around campus.

We also started to push for gender-neutral housing — but we didn’t get super far on that because of a lot of state regulations for college housing.

PPAF: Speaking of state regulations, what do you make of Virginia’s race for governor?

JC: When you have someone who’s in power, who treats everyone with respect, it sort of makes other people open their eyes a bit.If you have someone in power like Ed Gillespie, who thinks that birth control is a sin, it reinforces negative and misplaced ideas.

But if you have someone in power who says, “we need to support marginalized communities” and “we need to give good health care to women” — because there’s still a huge disparity in terms of women getting health care — that can make people open their eyes for the better.

PPAF: It’s an important race for sure.

JC: Yeah. I’ve been canvassing here and there — little things like that, that I can do. 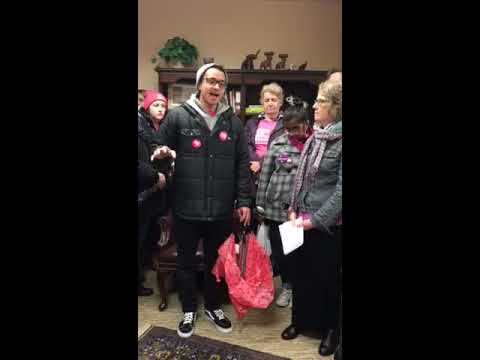 PPAF: Do you think your approach to advocacy has changed since Donald Trump became president?

JC: Yeah. There was maybe a two-year period when I’d been on hormones for a long time. I didn’t tell anybody; I was kind of just living my life. But once Trump got elected, I realized I wanted to be more visible and do more things, especially for trans youth. It’s incredibly hard for them to access any sort of care in the first place, and then having the president say, “we don’t care about you” is incredibly disheartening. It definitely reawakened my activism.

Jonas on the National Mall in D.C.

PPAF: You've spent a significant amount of time as a UVA student in Charlottesville — where a racist, bigoted, and deadly white supremacist rally took place in August. What was going through your mind when you learned that these hate groups had chosen to convene in your former city and campus? From what you’ve seen, how are Virginia residents fighting this kind of bigotry?

JC: For me, the white supremacist rally wasn't wholly surprising, but it was incredibly jarring and tragic. The history of Charlottesville paints a fairly clear picture of how the Black community has been treated in the city throughout time, and it is overall not very pretty.

I lived in Charlottesville for about six years — four for college, two as a "townie." When I first moved to Charlottesville from southern California, my mom — who was African American — told me that she did not want to come visit me in Virginia, due to a childhood trip to Mississippi that she described as "one of the worst times in her life." At the time, I tried to explain that things are different now and we've made great progress, etc. Although my mom passed away a few years ago, I have been thinking about what her response to the August 12 rally would have been.

What was more angering and surprising to me was how many people came from outside of Charlottesville to put their hate on display. I think it is amazing that so many social justice activists showed up to let those hate groups know that they were not welcome. Virginia residents are engaging with their state's history and challenging what symbols they want to represent their state in the future. People are letting it be known that hate groups are not wanted or welcome in their state anymore.