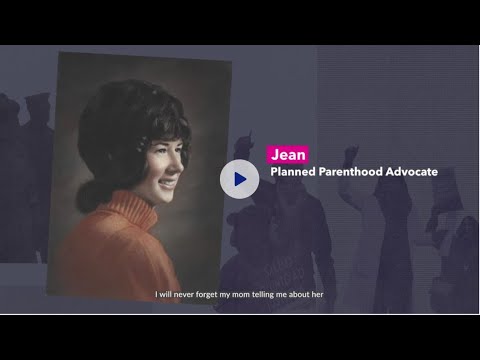 We Won't Go Back: Jean's Story

My mom never talked about sex or anything related to it when I was growing up.

So, it was a big deal when she sat my sister and me down at our small kitchen table in the spring of 1973 after the U.S. Supreme Court’s ruling in Roe v. Wade to talk about it. It’s something I will never forget. I hadn’t really heard anything about it before that. I was in college and oblivious to what was going on in the rest of the world. I didn’t think it was something that impacted me at the time.

I remember my mom telling us the importance of Roe. She said we could never go back to the old days of backdoor abortions. She told us about her friends who traveled out of state to get abortions. Some went as far as New York where it was more accessible. It was clear to me that abortions have happened since the beginning of time, and women will always find a way to have them. Making abortion safe and legal was a huge step forward.

The closest thing we had to sex education in my small-town high school was a family living unit in home economics. And that was it. We weren’t educated on birth control and our bodies.

During my freshman year in college, I finally learned about sex and birth control. Planned Parenthood came to every dorm on campus and gave presentations on reproductive health care—something they had just started doing. It struck me how comfortable they were talking about it. They took out a condom and put it on a banana and used diagrams. They just normalized it. It was no longer taboo.

"Women didn’t know what choices they had or even how to have safe sex."

Sex education changed everything. Before that, women didn’t know what choices they had or even how to have safe sex. I remember my classmates in high school being parents and getting married. It wasn’t something we talked about.

One Step Forward, Two Steps Back

I think about that and all of the struggles women have faced for centuries. It seems like we take one step forward and two steps back. Although we have made incremental progress, things don’t seem to be getting better. Reproductive rights have been under attack since Roe passed and it’s only gotten worse. I don’t think people realize what is going to happen if we go back. And that it will happen fast if Roe is overturned.

Women who have the means will always be able to get on an airplane and go somewhere else to get an abortion. It’s those with lower incomes who will be forced to have children, regardless of whether they can afford to feed, clothe, and take care of them.

“I’ve lived in Iowa without access to safe, legal abortion, and I never, ever want anyone to have to go through that again.”

It seems every year anti-abortion lawmakers in Iowa increase their attacks on reproductive freedoms in an effort to wear us down. Governor Kim Reynolds has made her priorities clear—she wants to eliminate safe abortion from Iowa. I’ve lived in Iowa without access to safe, legal abortion, and I never, ever want anyone to have to go through that again.

It’s time for individuals, their doctors, and their partners to make reproductive health care decisions—not politicians in Des Moines. We can’t go backwards any more than we already have.

Read more about life in Iowa before Roe v. Wade

Stay up to date on our fight against the constitutional amendment and for reproductive freedom. Subscribe to our emails now.

Stand with Planned Parenthood Advocates of Iowa in the fight to oppose the constitutional amendment every step of the way.

This page is controlled and operated by Planned Parenthood Advocates of Iowa.