From relentless attacks on reproductive health care to threats to our values, friends, and neighbors—especially immigrants, people of color, and the LGBTQ community—this past year challenged all of us, but we stood strong. We worked hard to stand up and fight back against attacks on our health, rights, and communities and we raised our voices to stand up for our values—and together, we made a big impact in 2018.

As we look ahead to next year, let’s take a look back at some of our favorite moments of 2018—historic firsts, hard-fought victories, and memorable milestones—all because of the dedication and activism of supporters just like you. 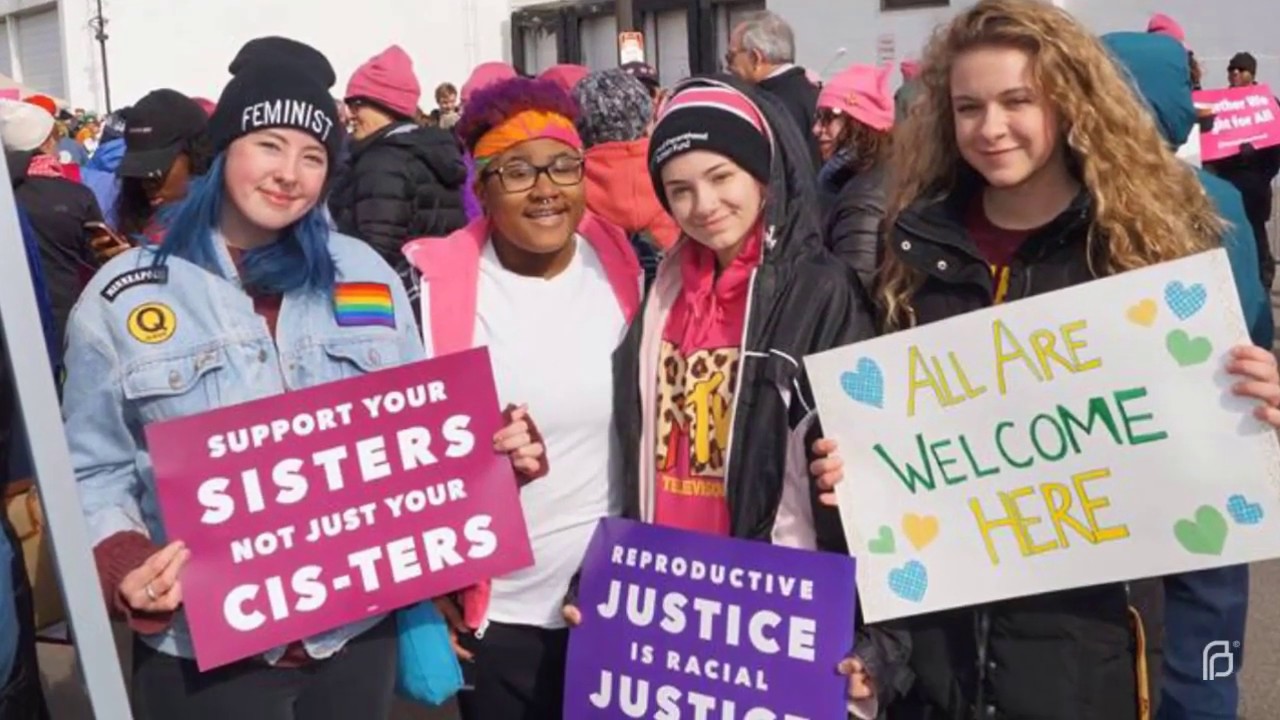 On January 3, 2018, Tina Smith was sworn in as a United States Senator. A lifelong champion for women and families, Senator Smith is the only senator to have ever worked for Planned Parenthood. Throughout her career, she has shown Minnesotans that they can count on her to listen to them and fight for them, and she continues to be a fierce advocate in the United States Senate.

2. Planned Parenthood is Here for Good

The billboard was more than a reassurance for patients and the Planned Parenthood family—it was also an act of resistance against one of the least talked about barriers to accessing reproductive health care: crisis pregnancy centers, or CPCs. The Planned Parenthood billboard replaces an advertisement for a local CPC.  In a year with so many attacks on reproductive health and rights, this message of resilience and moment of hope is worth celebrating.

In a district carried by Donald Trump in the 2016 election, DFL candidate and Planned Parenthood champion Karla Bigham kicked off a year of electoral victories by winning a competitive state senate seat. Karla Bigham’s victory sent a message early on in the year that Minnesotans want leaders who stand up for reproductive rights and protect and expand access to health care—not dismantle it.

Though the 2018 Minnesota Legislative Session lasted only three months, Republican lawmakers spent three months on legislation that needlessly attacked reproductive health and rights, including an Ultrasound Bill that would put politics between doctors and patients, a 6-week abortion ban that has been struck down as unconstitutional in every state where it has been passed into law, and an extreme personhood bill that would have banned abortion at the point of fertilization.

As if wasting taxpayer dollars on legislation that would be destined for a veto wasn’t enough, Republican lawmakers in Minnesota also rejected proposals for proactive policies that would have helped Minnesotans, such as the Protect Access to Contraception (PAC) Act which would have protected the right to no-cost birth control for over one million Minnesotans, and a bill that would have increased public education on consent for grades 8-12 to prevent and reduce incidences of sexual assault.

Thankfully, Governor Mark Dayton remained a dedicated advocate for Planned Parenthood and a backstop against the extreme anti-reproductive health policy, and the 2018 Legislative Session concluded without any of these harmful laws being signed or implemented.

In the spring, the first Planned Parenthood #BirthControlBus made the rounds across the Twin Cities to remind Minnesotans that Planned Parenthood is a trusted place for advice on birth control and reproductive health care from expert providers. Twin Cities residents felt the energy and empowerment from the bus, taking to Twitter to share their enthusiasm.

Be on the lookout for more buses throughout the Twin Cities metro area in 2019 that promote Planned Parenthood’s expert reproductive health care services. If you catch sight of a Planned Parenthood bus, tweet @ppmn using the hashtag #BirthControlBus.

We’re taking action – so we can become even stronger for the people we care for, today and into the future. With this new consolidation, we will sustain and grow the number of people we serve in our clinics, while strengthening our regional political power and local leadership in all five states.

In June, Planned Parenthood Action Fund painted the DFL state convention pink. We talked with delegates, candidates, lawmakers, and supporters about our work to fight for reproductive rights and how to mobilize Minnesota voters to elect candidates who stand up for access to reproductive health care.

Congratulations to my friend and partner in the Senate @TinaSmithMN on the DFL nomination. From AMY to TINA congrats! 🙌 #DFL2018 pic.twitter.com/t7YeFvrRpI

Rock the Garden is an annual music festival held at the Walker Art Center sculpture garden in Minneapolis. This year, Planned Parenthood handed out pink sunglasses and bandanas to attendees, keeping them cool in the heat and reminding them that becoming a patient helps strengthen Planned Parenthood’s ability to provide care to others.

Dozens of volunteers from Minnesota journeyed to Power of Pink to gain the skills to fight back and build power in their own communities, and reported making valuable connections and coming home more energized than ever to elect reproductive health champions.

In a signal for what was to come in November, turnout in the primary election soared. Minnesotans selected a powerful progressive ticket to put forward and showed that they were ready to show up to the polls and vote for leaders who would stand up for access to health care.

13. Taking Back the Minnesota House of Representatives

On Election Day, your hard work paid off and Minnesota saw a pink wave of pro-Planned Parenthood candidates win their elections.  As a result, pro-reproductive health legislators will have a majority in the Minnesota House of Representatives in 2019 and Planned Parenthood champion Melissa Hortman will become speaker of the house.

On Election Day, Minnesotans elected Angie Craig to Congress, unseating Lewis. Representative-elect Angie Craig will fight for our shared values and stand up against bullies like Jason Lewis. She will also be the first openly LGBTQ member of congress from Minnesota. How’s that for poetic justice? We can’t wait to see Angie Craig start working for the people of Minnesota.

In Minnesota’s 3rd Congressional District, Rep. Erik Paulsen voted over and over again to take away people’s access to health care. During his five terms in office, he voted 12 times to “defund” Planned Parenthood, even though more than 70,000 Minnesotans and 16,000 of his own constituents rely on Planned Parenthood centers each year.

He also rarely held town halls. In 2018, he hosted his first series of town halls in almost seven years—but most of his constituents were denied admission to the heavily restricted meetings. Some had to resort to livestreaming the events outside of the buildings they took place in, barred from admission despite being constituents of the district.

At the polls, voters in Paulsen’s district sent a clear message: no decisions about us without us. Representative-elect Dean Phillips, who built his campaign on holding open and accessible town halls and protecting and expanding access to health care, defeated Erik Paulsen handily. We can’t wait to work with Dean Phillips in Congress.

Ilhan Omar made history in 2018 by being one of the first Muslim women elected to Congress, along with Rashida Tlaib from Michigan. She is a fearless champion for civil rights, LGBTQ rights, immigrant rights, and more, and is an inspiring role model to all Minnesotans. Minnesota is stronger for Ilhan Omar’s leadership and voice, and we can’t wait to see what she achieves in Congress.

Tim Walz and Peggy Flanagan, two Planned Parenthood champions, were elected governor and lieutenant governor. Their opponent, Jeff Johnson, ran his campaign right out of the Trump playbook—attacking Minnesota’s immigrant communities, signaling he would roll back protections for Minnesotans with pre-existing conditions and eliminate public funding for Planned Parenthood patients, and promising to implement one of the most draconian abortion restrictions in the country. Then, on Election Day, Minnesotans spoke loud and clear at the polls and Walz and Flanagan claimed a decisive victory.

Lieutenant Governor-Elect Peggy Flanagan became the highest-ranking Native woman elected to executive office in the United States. A member of the White Earth Band of Ojibwe, Peggy Flanagan has spent her career working to make sure that all Minnesotans can live to their full potential. We know that Governor-elect Walz and Lieutenant Governor-elect Flanagan will work hard to bring their vision of One Minnesota to fruition, and we look forward to working with them in 2019 and beyond.

Tina Smith’s victory, along with the victory of Amy Klobuchar, Angie Craig, Ilhan Omar, and Betty McCollum, means that the 2019-2020 Minnesota Congressional delegation will be 50% women for the first time in Minnesota history. Way to go, Minnesota!

As you can see, there’s a LOT to celebrate from this year. And this is just the beginning. Now, it’s critical that we work with the governor’s office and state legislature to pass proactive policy and ensure that every Minnesotan has access to high quality and affordable health care. Don’t be left out of the loop—sign up to stay informed about this important work.

Become a voice of progress for reproductive health.  Sign up and be a change maker.

Get the latest legislative updates, sexual and reproductive health news, and action alerts by subscribing to our email list.