Today, we delivered an open letter from civil rights, health care and good government groups  to Senate leaders and law enforcement about the hostile and threatening environment at the December 10th Senate Health Policy Committee meeting. 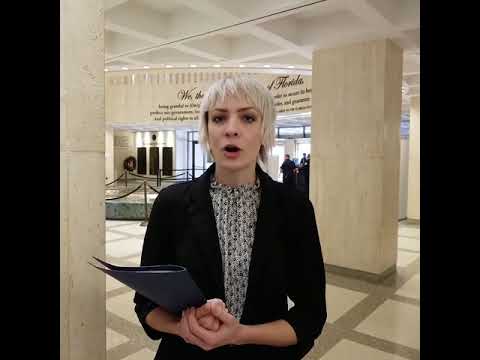 RE:    Unsafe and threatening atmosphere at committee meeting

The organizations represented above were present for the December 10 Senate Health Policy Committee hearing on Senate Bill 404, forced parental consent for abortion. We are writing to you on behalf of dozens of young Floridians who felt disrespected, threatened and even under attack both by advocates for the bill as well as senators on the committee. They also felt the staff of the sergeant’s office was following the senators’ lead in giving preferential treatment to those who were hurling insults and threats at these young people who were there exercising their rights to participate in our legislative process, to speak out against a bill that the medical community has established would make them less safe.

According to a report by the National Abortion Federation, “Since the 1973 Roe v. Wade Supreme Court decision that made abortion legal, there has been an organized campaign by anti-abortion extremists which has resulted in escalating levels of violence against women’s health care providers.” These extremists have used arson, bombs and chemicals to threaten, intimidate, attack and kill. Since 1993, they have committed 11 murders and 26 attempted murders including one doctor who was gunned down at his church in Kansas in 2009 and a police officer and two clinic staff who were killed in Colorado in 2015.

We have seen everything from arson to acid attacks to bombings and multiple murders here in Florida. A single clinic in Pensacola has seen the murder of one of its doctors, and the doctor’s escort whose wife was also wounded in the attack. The clinic has been bombed repeatedly, once destroyed completely by a pipe bomb and most recently, gutted by a firebomb.

This is why we ask you to take our concerns seriously.

Most recently, some of the most disturbing things being said in this community are coming from local State Representative Mike Hill, who laughed at a constituent’s suggestion that gay people be put to death and claims God told him his six-week abortion ban didn’t pass last year because it had made exceptions for victims of rape and incest.

For months we have been raising concerns about Sen. Dennis Baxley rationalizing his staunch anti-abortion stance by parroting white supremacist ‘replacement theory’ that has been linked to recent hate crimes including mass murders from Texas to New Zealand. And yet, the Senate leadership remains silent.

“When you get a birth rate less than 2 percent, that society is disappearing,” he said of Western Europe. “And it’s being replaced by folks that come behind them and immigrate, don’t wish to assimilate into that society and they do believe in having children. So you see that there are long range impacts to your society when the answer is to exterminate.”

Known white supremacist Greg Pound, who has had his own children taken away from him and has already been determined to be a threat to himself or others when he was Baker Acted in 2008, testified in committee on “white replacement theory.”

His completely false and racist rant was met with applause, and there was no reprimand from Chair Harrell:

“The Planned Parenthood organization started this abortion mill industry with the intent of wiping out the African American families and people in general. And it's worked so well on them that now they’ve applied to the white Caucasian race…We have to realize that we’ve been brainwashed in believing into a system that’s genociding us as a people and as a nation…Our fertility rate is so low we can’t even reproduce ourselves. If every woman in America got pregnant we cannot reproduce ourselves from Europe, Canada, or America because we have believed this lie that children are a bad idea.”

When FAMU student, Imani Hutchinson, had the courage to speak out against Baxley’s racist hate speech she was chastised first by Sen. Mayfield for her lack of decorum and then again by Chair Harrell. And yet, when it comes to Greg Pound and Sen. Baxley’s dangerous hate speech there is no rebuke. None.

Abolish Abortion Florida testified using scripture to level threats against anyone who supported any form of legal abortion. We can only assume this means legislators who would support the bill and supporters in the room.

“Isaiah 10:1 says: ‘Woe to those that decree unrighteous deeds, who write misfortune which they have prescribed.’ SB 404  is an unrighteous decree. ‘Shall I not punish them for these things?’ says the Lord. Jeramiah 1:9 says: ‘And shall I not avenge myself on such a nation as this?’”

We notified the sergeant at arms of menacing and threatening comments but he shrugged it off.

We want to stress to you that to ignore threats and hate speech is to condone them and that leads to violence.

News outlets have recently condemned legislative leaders for doing nothing about Hill and Baxley’s hate speech:

“Two state legislators who, in days gone by, said things that would have ruined or irreparably damaged a political career. Instead, they’re allowed to chug along as if nothing happened. It’s the end of consequences as we used to know them. Candidates and officeholders alike have good reason to feel emboldened. Party leadership, from Washington on down to Tallahassee, has neither the will nor the inclination to hold them fully and publicly accountable. Until leaders and voters demand better, politics will get uglier, more uncivil and less American.”

It’s not surprising in an environment where this kind of speech is tolerated that other speakers felt emboldened too and leveled attacks at LGBTQ people, at women, at young people.

We should all want to encourage Floridians from all walks of life to be engaged in our representative form of government. In order to do that, we have to provide a safe and fair setting to ensure that they will continue to take time away from things like medical school and work to participate and speak out about bills like this one that the medical community has clearly established poses a threat to their health and safety.

Senate Bill 404’s next step is in Sen. Simmons Judiciary Committee. We are asking the leadership of the Senate and law enforcement to ensure, if this bill is put on the agenda, that everyone who wishes to provide testimony will be treated fairly, with respect and that their safety will be a top priority.

Thank you in advance for your attention to this important matter.

If you wish to arrange a meeting or to speak with us by phone please contact Laura Goodhue at 561-472-9940.

This page is controlled and operated by Florida Alliance of Planned Parenthood Affiliates, Inc..