Arizona Rep. Trent Franks’ 20-week nationwide abortion ban is going to be up for a vote next week, and a number of Republicans are speaking out against this extreme and blatantly unconstitutional legislation that continues to play to the fringes of the party while further alienating women across the country.

In the committee markup on Wednesday, Franks said that he opposes an exemption for rape victims because,

the incidence of rape resulting in pregnancy are very low.

Not surprisingly, Franks has his facts wrong. Even former Republican Congressman Joe Scarborough (who is pro-life) and former RNC Chairman Michael Steele believe anti-women’s health politicians like Trent Franks are too extreme and these types of beliefs have “nothing to do with conservatism.” Watch as they discuss his comments on MSNBC’s Morning Joe: 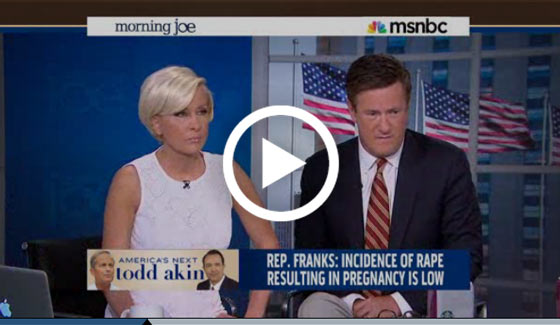 Pennsylvania Republican Congressman Charlie Dent thinks the bill’s so bad that he discouraged Republican leadership from bringing it to a vote.

Clearly the economy is on everyone’s minds, we’re seeing very stagnant job numbers, confidence in the institution of government is eroding and now we’re going to have a debate on rape and abortion. The stupidity is simply staggering.

As a Republican who believes in limited government, Rep. Franks’ abortion ban is an atrocious example of governmental overreach that takes away a woman’s personal health care decisions and puts them in the hands of politicians. Women don’t turn to politicians for advice about birth control, mammograms, or cancer screenings or treatments. Politicians should not be involved in a woman’s personal medical decisions about her pregnancy.

Tell the Republican House leadership and your representative to stop the nationwide abortion ban.