April is Sexual Assault Awareness Month, and — as a Lesbian Latina who’s active with Planned Parenthood — I want to bring awareness to something that often gets overlooked: sexual assault in the Lesbian, Gay, Bisexual, Transgender, and Questioning (LGBTQ) Community.

In order to talk about sexual assault within the LGBTQ Community, advocates for sexual and reproductive health need to deconstruct the myths surrounding sexual assault and create safe spaces for LGBTQ survivors of sexual assault.

Level Setting: Sexual Assault is a Problem in LGBTQ Communities

Contrary to what the media often portrays, sexual assault does not only occur in the form of male-to-female violence. Sexual assault can also occur between same-sex couples, and people across the gender spectrum can be both perpetrators and victims of sexual assault.

Looking to address the problem of sexual assault through a lens of men being violent toward women can actually keep LGBTQ people from being aware that they have been sexually assaulted. The California Coalition for Sexual Assault (CALCASA) explains that when LGBTQ people are struggling with the process of coming out, they might be targeted by a predator and (mistakenly and tragically) think that a negative sexual experience is something that everyone in their situation goes through. It shouldn’t be that way.

LGBTQ survivors may also find that survivor resources are not set up to recognize that sexual assault and violence happen to people who are not straight women.

Make no mistake: Perpetrators of sexual assault are aware of the vulnerability that survivors have in the LGBTQ community, according to CALCASA. Many survivors don’t report their sexual assault  because of threats of retaliation from perpetrators, as well as from feelings self-blame and shame. When seeking help, LGBTQ survivors of sexual assault can also fear and mistrust the responses of criminal justice authorities, health care providers, and crisis center staff, as well as elements of reporting like being required to disclose their identity.

It’s no surprise, then, that 46% of Transgender folks don’t feel comfortable talking to the police about their sexual assault, according to a 2011 National LGBT Task Force study of 6,436 Transgender individuals across the country. Underreporting like this makes it difficult to calculate accurate data about LGBTQ sexual assault. It also shows why spaces that provide individual services for LGBTQ survivors are so vital — and why spaces that trivialize or disbelieve their needs are so harmful.

I can tell you from experience: Anyone who has been a patient at Planned Parenthood knows that confidentiality greets you at the front door. LGBTQ survivors not only receive individualized services at Planned Parenthood health centers, but can also find the inclusive environment they need.

In too many circumstances, the results of sexual assault are STDs or unwanted pregnancy. Not having anywhere to turn can be devastating for survivors’ emotional stability. Thus, it makes all the difference when survivors can feel safe and get the care they need.

Planned Parenthood´s reproductive rights movement is gaining strength. Within this movement, LGBTQ survivors are expressing social outrage about sexual violence, taking a stand against it, and learning how to regain control over their bodies through survivor speak-outs like Take Back the Night. Just a few examples:

The reproductive rights movement reminds people that they have power over their lives — and that they are not responsible for having been sexually assaulted.  Planned Parenthood includes sexual consent as part of the conversation in sex education, which teaches young people how to talk about sex, including how to ask for and recognize consent in sexual situations. That’s a good thing, since there’s overwhelming need and support for consent education in schools.

I feel lucky to be a part of this movement by establishing a campus club affiliated with Planned Parenthood at Fresno State University. I encourage you to break the myths about sexual assault within the LGBTQ community and become a safe, confidential ally for survivors.

The Planned Parenthood Generation is a movement of passionate, committed young people across identities and issues that organizes with, by, and for their generation in order to achieve reproductive freedom and change the world. Join the movement of young people across the country who are rising up to say “enough is enough” to sexual assault, and the unprecedented attacks on access to safe and legal abortion and reproductive health care! 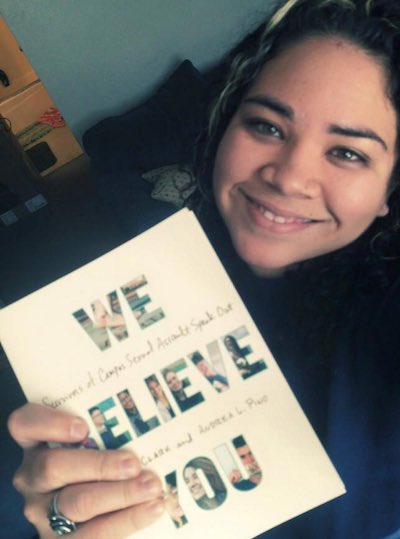 Stephanie Canales is originally from El Salvador, Central America. She is currently studying for a Masters degree in Family Therapy at California State University of Fresno. Her passion for activism began as a Women's Studies student. She now works as a part-time advocate for survivors of sexual assault at Rape Counseling Services in Fresno. Her story of survival and path to advocacy for survivors of sexual assault can be found in the book "We Believe You" (@WeBelieveYouBk) and on Latina Lista. Learn more about her current work in activism at wamff.org/who-we-are (#wamff16).