Brett Kavanaugh is a Nice Guy™. Some say he should get to be on the Supreme Court. Instead, how about a Mediocre White Guy Award?

In case you didn’t hear, Brett Kavanaugh is a Nice Guy™. Anti-women’s health Sen. Ron Johnson (R-WI) said so. “He’s just such a nice person,” Johnson told Fox News. “I don’t see how anybody could oppose his nomination.”

Johnson isn’t the only one raving about what a Nice Guy™ Brett Kavanaugh is. Random acquaintances think it’s very important (and relevant!) to share just how “nice” Kavanaugh is to women. According to the Nice Guy™ narrative, Kavanaugh, who is Trump’s nominee for the Supreme Court, should get a lifetime appointment to the nation’s highest court because he:

a) is good at carpooling

d) knows women and has even let some work for him 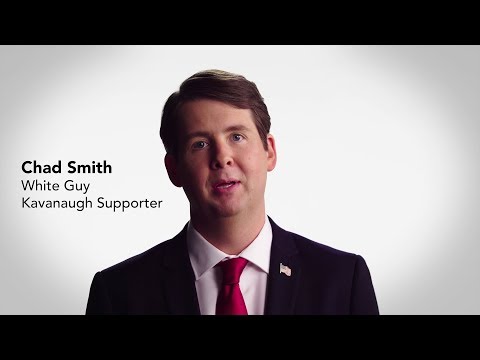 What You Don't Know About The New SCOTUS Nominee

We don’t want this guy (or Brett Kavanaugh) to tell us what to do with our bodies. Our bodies are our own. Period. (Video: Funny or Die and Planned Parenthood Action Fund.)

If you want more proof of Kavanaugh’s judicial qualifications, look no further than the 34 congressional testimonies the White House sent reporters. All 34 glowing testimonies about Kavanaugh are by white men — a glaring blindspot that most certainly went unnoticed by the administration.

The White House probably had trouble finding women who support Kavanaugh because so few exist. According to a new CNN poll, only 28 percent of women across the country want Kavanaugh confirmed to the court. Why? Primed by decades of institutionalized sexism, most women know a Nice Guy™ when they see one. These women know that Kavanaugh’s “niceness” to ladyfolk means nothing when his judicial record shows that he:

Kavanaugh might be cool with girls playing basketball,* but he’s not okay with them having bodily autonomy. He’ll hire a few women, but as their boss, he might draw the line at giving them full health insurance coverage. But hey, as he’s taking your rights away, he won’t be mean about it! And he might even teach you how to dribble.

If you have friends, family, neighbors, coworkers, people at the dog park who have Very Good Dogs that sometimes play with your Very Good Dog, ask them what they’ve heard about Brett Kavanaugh. And if it’s that he’s a “really Nice Guy™, then remind them of all the Nice Guys™ their spidey senses picked up on and effectively weeded out.

(Or, if you want to be practical, you could just tell them that Brett Kavanaugh is a direct threat to women’s constitutional rights, including access to abortion, birth control, and a hell of a lot more — and that if we pressure our senators to stop him, we can make sure he doesn’t get that seat on the bench.)

On September 4, our senators will begin hearings on Kavanaugh's nomination.

Our dissent must be deafening. Contact your senators and demand that they STOP Kavanaugh's Supreme Court nomination and protect women's constitutional rights, including abortion access.

*“He coaches not one but two girls’ basketball teams,” raved someone who has met Kavanaugh in actual words published in The Washington Post.