Washington, DC –– A day after John Kasich’s surprise second place finish in the Republican New Hampshire primary, Planned Parenthood Advocates of Ohio went up with an ad buy targeting Kasich’s plan to sign a bill that would block thousands of Ohioans from accessing basic care at Planned Parenthood. The ads direct supporters to a page where they can send a message to Kasich.

The bill, HB 294, would slash health care for women across the state --- even targeting a “Healthy Moms, Healthy Babies” program that aims to prevent infant mortality, despite Ohio having one of the highest infant mortality rates for African Americans in the nation. It would also eliminate HIV testing programs and a domestic violence initiative.

The five-figure ad buy includes this VIDEO that will be displayed on Facebook and all major online news sites in Columbus and across the state of Ohio.

“The secret is out: John Kasich is terrible for women’s health. He knows that his attacks on women’s health are unpopular --- that’s why he never talks about them on the campaign trail. But as the Governor of Ohio, John Kasich has done everything within his power to ban access to safe, legal abortion and basic care at Planned Parenthood health centers. Now he has his sights set on infant mortality prevention programs, HIV testing, and essential sex education. Let his dangerous actions in Ohio be a warning to the American people --- we can’t afford this wrongheaded agenda in the White House.”

While Governor of Ohio, John Kasich has quietly enacted 17 measures to restrict access to reproductive health care. Under Kasich’s watch, Ohio has shuttered providers across the state, and even blocked funding for rape crisis centers just for referring survivors of sexual assault to abortion providers. Kasich is now ready to sign a bill that eliminates infant mortality, domestic violence, and HIV prevention programs --- all in the name of his vindictive campaign to eliminate essential care at Planned Parenthood health centers. 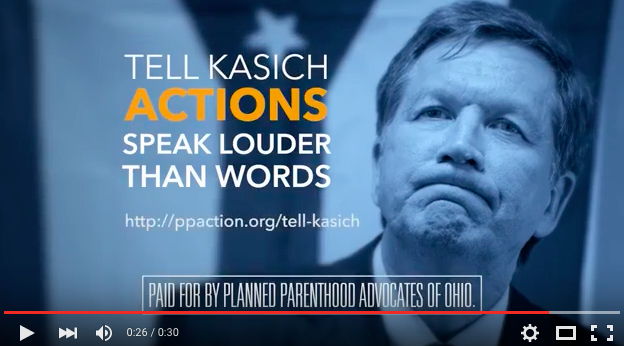 Women’s health is a touchstone issue in 2016. It was a deciding issue in the 2012 presidential election. Mitt Romney took a hard stance on Planned Parenthood and reproductive health care in 2012, and he then lost the election by thebiggest gender gap in recent history. InVirginia in 2013, women’s health was a deciding factor when Terry McAuliffe won women overall–and won 59% of the votes of people who said abortion was the most important issue to them – 20% of the electorate.

So why does Kasich want to defund Planned Parenthood,

and 50,000 tests that stop the spread of HIV and other diseases

all while 65 percent of Ohioans support funding for Planned Parenthood?

It's time to stand up for women's health.

FACT: Governor Kasich is no moderate, he is an extreme abortion opponent.

FACT: Ohio women are driving to Michigan to access abortion.