Anti-abortion politicians keep trying to “defund” Planned Parenthood. But what does that really mean?

Politicians who think they know better than you about your reproductive health decisions are called gynoticians.

One of their favorite ways to interfere in people’s personal, private medical life is to tell them where they can and cannot get health care — like blocking access to health services at Planned Parenthood. 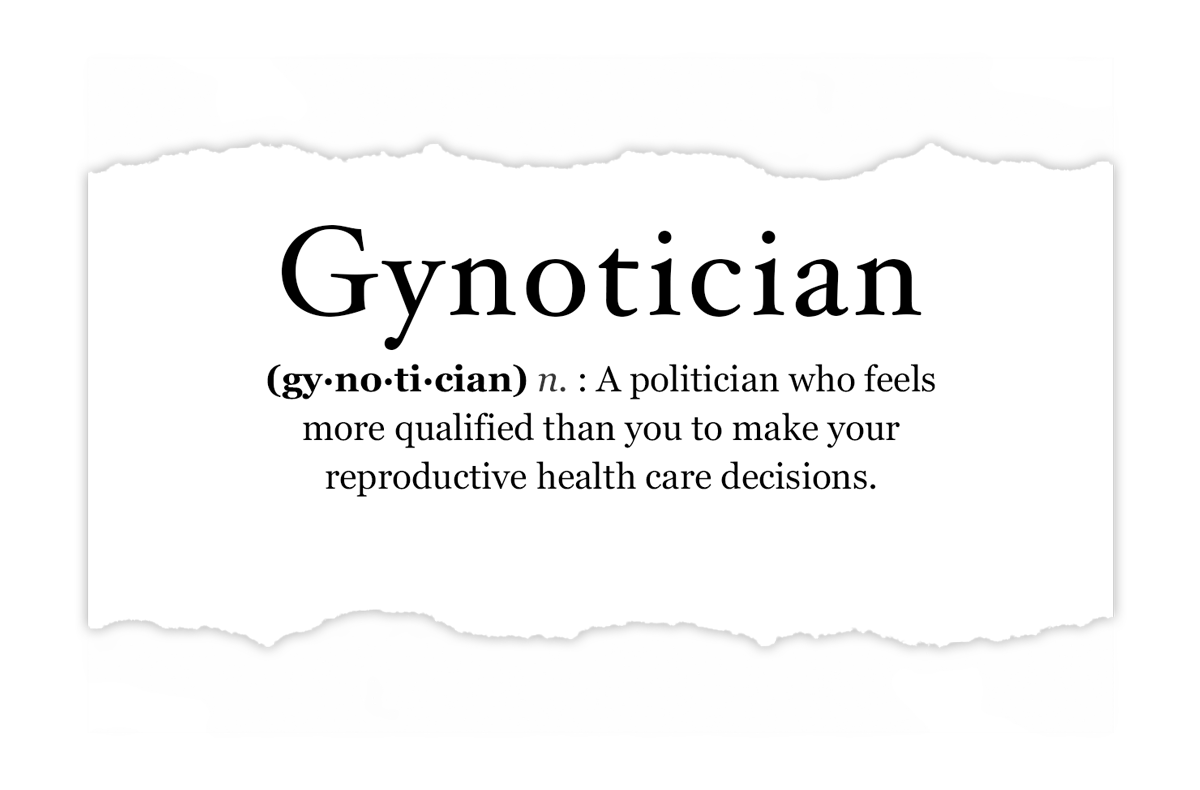 That brings our “who” back to who is getting cut from care: Planned Parenthood patients.

This includes the one in five women in America who have come to Planned Parenthood health centers at some point in their lives. It’s also the low-income folks, who rely on Medicaid for health care coverage, who would be blocked from receiving care at Planned Parenthood if the gynoticians get their way.

Let’s be clear: there is no line-item in the budget for Planned Parenthood, and there’s no “funding” that’s being cut.

Gynoticians’ extreme laws target patients who rely on Medicaid or get services through public programs like Title X (the federal government’s family planning program). These laws prevent patients from getting the care they need simply because that care is provided by Planned Parenthood — even though these patients want to go to Planned Parenthood for services, and in some places, have no other health provider to turn to.

It’s plain to see: These unfair laws disproportionately affect low-income women, men and families who rely on Medicaid and other public programs for health care.

When: Since The Smear Videos

Defund efforts have been going on for years, but they really ramped up after a slew of discredited, faked videos hit YouTube last summer.

Along with an exponential increase in efforts to defund Planned Parenthood, over the past 9 months there came an increased number of dangerous bills to restrict access to safe, legal abortion.

Where: In Washington and Across the United States

It’s almost impossible to count how many states have attempted to defund Planned Parenthood since the discredited videos — almost.

Why: They Will Stop at Nothing to Ban Abortion

We know the real reason: They want to outlaw abortion — and they’re trying to do it by chipping away at access to health care, bill by bill.

Gynoticians are so fixated on banning abortion that they are using these discredited smear videos as an excuse to pass their dangerous laws at the high price of potentially cutting off millions of men, women and young people from preventative care. This is all in spite of the fact that Planned Parenthood did nothing wrong, and the criminals behind the videos — at the Center for Medical Progress (CMP) — spent three years creating a fake company and fake identities, breaking the law, manipulating the public, and spreading malicious lies.

Why else would gynoticians be pushing these laws to defund Planned Parenthood? Well, they just seem to get off on interfering in people’s reproductive and sexual health care decisions.

UPDATE — JULY 26, 2016: The Harris County, Texas prosecutor dropped the pending felony charges against CMP Founder David Daleiden based on a technicality. This is not the same as finding that Daleiden is innocent of the criminal charges. In fact, three civil cases remain pending against Daleiden to hold him responsible for the frauds he perpetrated. The decision to drop the charges on a technicality doesn't change the fact that Daleiden and other anti-abortion extremists are guilty of wrongdoing and malicious acts against Planned Parenthood in order to advance their anti-abortion agenda.

HOW YOU CAN HELP:

Tell the world that you Stand with Planned Parenthood.