"There is no science or medicine behind this bill -- just politics. This is the 29th time in four months that Congress has tried to restrict abortion, which is outrageous. The American public does not want politicians to interfere in women's personal medical decisions and does not want Congress to spend its time on this."

Congress is considering a bill that would ban abortion at 20 weeks — nationwide. What’s more, state legislatures are pushing their own 20-week bans. Once again, politicians are inserting themselves in the most private and personal medical decisions best left between a woman and her doctor.

Nearly 99 percent of abortions occur before 21 weeks, but when they are needed later in pregnancy, it’s often in very complex circumstances — the kind of situations where a woman and her doctor need every medical option available. 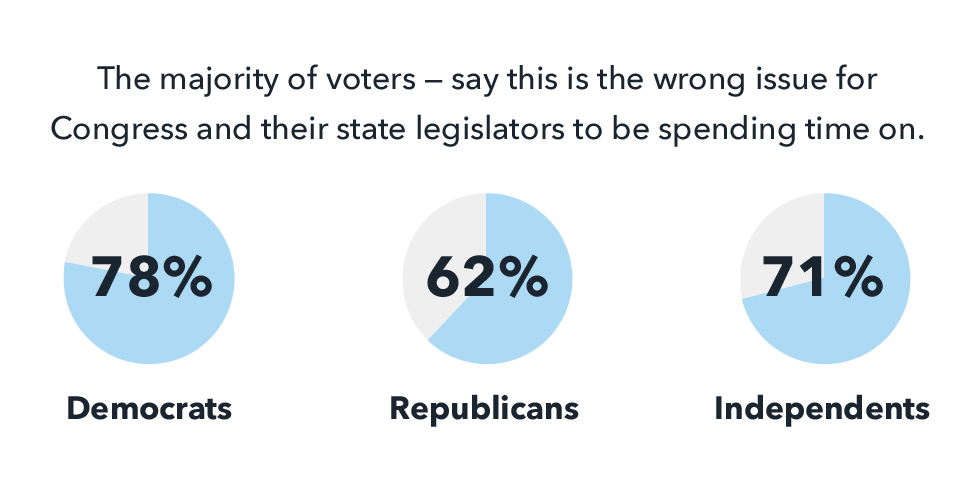 Read the stories of women who had to make the decision to end their pregnancies — a decision that would be taken away with a 20-week ban.

Christie was pregnant with her second child, a planned and wanted pregnancy

My husband and I were confronted with two equally horrible options — carry the pregnancy to term and watch our baby girl suffocate to death upon birth, or end the pregnancy early and say goodbye to our much-wanted and much-loved baby girl.

After a 20-week ultrasound, she found out her daughter would be born with a severe complication called congenital diaphragmatic hernia (CDH) and would suffocate at birth.  She made the difficult decision of ending the pregnancy at 21 weeks.

At 18 weeks, April and her husband found out that their baby had lethal skeletal dysplasia.

Everything about a later termination is already so incredibly difficult — even just picking up the phone to make the appointment.  The 20-week ban adds another hurdle.  It’s just cruel.

He would never be able to breathe on his own.  If she carried the pregnancy to term and he was born alive, he would die shortly after of suffocation.  April hoped the news wasn’t true, so she requested more tests to confirm the diagnosis, which took two weeks.

At 21 weeks, she aborted.  April shares her story because she has found that it can change opinions.  Several people she knows personally who previously had been anti-abortion told her that they would have done the same thing she did.

At 21 weeks, Jeni was told that her fetus had multiple severe defects.

It would have been too hard for me to carry to term, and it seemed pointless to make the baby suffer too when she would never survive.

She could end the pregnancy or wait for the fetus to miscarry or die.  There was no way that the pregnancy would end in a live, healthy baby.  Jeni and her husband chose to terminate the pregnancy, but because they live in Texas, they were forced to endure several cruel restrictions: a two-day waiting period, listening to a mandatory script about abortion, and a sign-off from two separate doctors.

Julie’s doctor told her and her husband that their son’s brain had a serious abnormality, a diagnosis that they confirmed with tests, more ultrasounds, and an MRI.

We were excited about the 20-week scan because we thought we were just finding out if it was a boy or a girl.  The technician said we were having a boy, and sent us back to our OBGYN's office.  The first thing she said when she walked in was, ‘I’m so sorry.’

If the baby survived birth, he would never speak, walk, or have conscious thoughts based upon what had developed in his brain.  Julie and her husband decided to terminate the pregnancy, and the soonest they could get the appointment was at 22 weeks.

When we make this illegal, we are just talking about making it unsafe.  Because I would have done anything to get an abortion.  I would have gone to a back alley if I had needed to.  I believe it is my obligation as a mother to do whatever I can to make a terrible situation [for my children] better.  I did that for my daughter.  I resent it very much when politicians try to force me to carry a very sick baby to term and watch her die a slow and tortured death just because it fits their – and not my – religious sensibilities.

But Kate was nervous and insisted on another Level 2 scan during her third trimester.  It turned out that her baby had moderate to severe Dandy-Walker syndrome as well as another brain malformation.  If she survived, she would have had trouble swallowing and breathing, and she would have been afflicted by seizures, vomiting, choking, and muscle spasms. Her short life would have been filled with suffering.  Kate and her husband flew across the country to Colorado for the abortion.

Chelsea’s much-wanted baby was diagnosed at 22 weeks with multiple heart defects including transposition of the great arteries, pulmonary atresia, and ventricular septal defect.

He also had DiGeorge syndrome, a genetic disorder that caused not only his heart defects but would have caused many other problems for him as well.   She and her husband decided to abort after consulting with a team of medical specialists, as well as a genetics counselor.  They terminated the pregnancy at 24 weeks.