“I am continually surprised and disappointed by the lengths to which Republicans in the House of Delegates will go to prevent their own constituents from getting access to health care."

Instead of putting the veto through the process prescribed by Virginia’s constitution, Howell and other House Republicans “robbed the voters of their voice by using a procedural gimmick to obstruct the normal legislative process,” McAuliffe added.

Howell is one man who will do anything to stand in the way of healthcare for thousands of Virginians. But that doesn’t stop him from reaping the benefits of his own state-funded health insurance.

“Like 103 other legislators, Howell has gold-plated health insurance—supplied by the people of Virginia, more than 1 million of whom go without,” reported the Richmond Times-Dispatch. How nice for Howell.

The 71-year-old Howell recently needed a hip replacement, which can cost between $11,100 and $125,800. Howell did not have a problem using taxpayers’ money for his surgery, and while he recovered, he continued his anti-Obama-anything fight to block Virginians from accessing the same type of coverage.

Howell calls the Medicaid expansion a “brand-new entitlement.” We’re not so sure who is entitled, here. Howell refuses to accept taxpayer-funded health care on behalf of low-income Virginians, but it’s cool for himself. Who’s entitled now?

Let them eat cake…and find their own insurance

Since assuming office in January, McAuliffe has been trying to pass a state budget and safeguard Medicaid expansion under the Affordable Care Act, which would be available for over 400,000 eligible Virginians. On June 12 Howell passed a budget that included a provision blocking Medicaid expansion.

Undeterred, McAuliffe took swift action and made a line-item veto of the provision blocking expansion.  But late Monday night, Howell killed McAuliffe’s veto by ruling it—without a vote—as “out of order.”

Howell and his Republican-controlled House are barring access to affordable health care with a procedural action and a thick web of red tape. How dare you, Howell?

“This time, it appears that [Howell] is really drawing the line in the sand around no compromise…It’s a behavior I haven’t seen in the past,” Fred Rankin, chief executive of the nonprofit parent of Mary Washington Hospital, told the Washington Post. Mary Washington is the largest hospital in Howell’s district. In order to keep its free clinic and community health centers open for Fredericksburg’s poor, Mary Washington needs the $14 million per year that it would get under the Medicaid expansion portion of the Affordable Care Act.

Howell is hell bent on forfeiting Virginians’ health care benefit, but it won’t go by unnoticed.  We are watching, because it’s not just about Virginia. Politicians like Howell are slamming the health care doors on people across the nation who are in need of affordable health care—despite broad support for Medicaid expansion, according to polls conducted in March and in May.

The reason for the support is obvious. Medicaid is the only health care option for some. It provides critical preventive and primary reproductive health care services to low-income women, including birth control. All women and their families should have access to affordable health insurance.

See our map of the 27 states that stand to give millions of Americans coverage under Medicaid expansion: 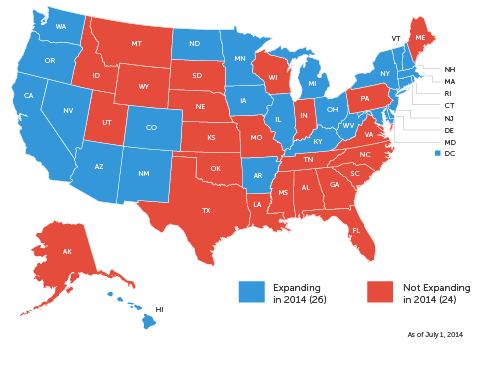 We don’t know how far Howell will go to keep affordable health care from people who need it, but we are ready for the fight.