A new study shows the real-world consequences of losing access to care at Planned Parenthood for women in Texas, where politicians have blocked that access.

First, a short history: About a decade ago, Planned Parenthood was part of a program in Texas that helped thousands of women a year get reproductive health care. The program had great results.

But in 2013, anti-abortion legislators in Texas cut Planned Parenthood out of its public family planning program for low-income women — ignoring the fact that its health centers offer lifesaving preventive services, like cancer screenings and birth control. Planned Parenthood had been the largest single provider in the Texas Women’s Health Program, providing about 40% of services. What happened next? According to research published Feb. 3 by the Texas Policy Evaluation Project, fewer women got their birth control, and more women got pregnant.

Researchers drew their data from before and after Planned Parenthood was barred from the Texas Women’s Health Program, which serves low income women.  Prior to the ban, Planned Parenthood had been the largest single provider in the program. Here’s the gist:

Women across the board reported difficulty making appointments at reproductive health providers and paying for care — consequences that are even more devastating for low-income women and women living in rural areas. In fact, there were more pregnancies in Texas counties that blocked access to Planned Parenthood.

Anti-Planned Parenthood Politicians Have Their Taxpayer Talking Points All Wrong 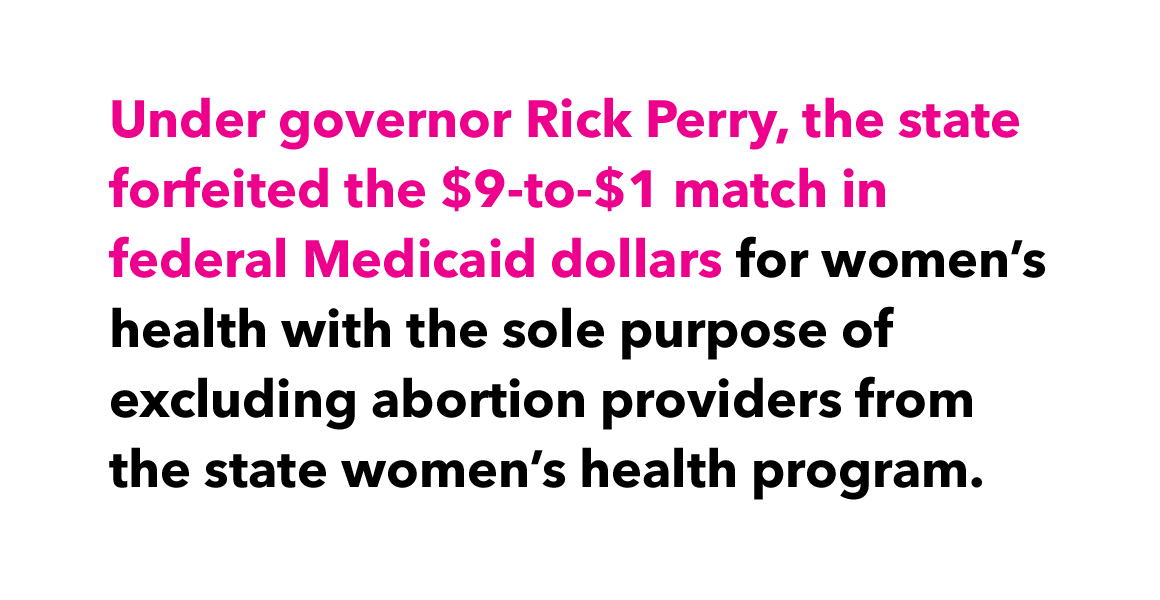 But backward politicians don’t stop there. Have you ever heard them rail against poor women who have unintended pregnancies and use public services to help raise their children? It’s a despicable line of illogic, and it makes politicians’ hypocrisy on taxes that much more infuriating.

In more tax-dollar doublespeak, Texas lawmakers had the state give up hundreds of millions in federal Medicaid funds when they kicked Planned Parenthood out of its public family planning program. Under governor Rick Perry, the state forfeited the $9-to-$1 match in federal Medicaid dollars for women’s health with the sole purpose of excluding abortion providers from the state women’s health program. Experts predicted a rise in Medicaid costs, and Texas taxpayers are now paying those extra costs.

Who is really paying the price when it comes to “defunding” Planned Parenthood? Low-income women, who end up not getting the care they need when politicians block their access. But don’t take it from us. Take it from the researchers of the study:

"...our analyses suggest that the exclusion of Planned Parenthood affiliates from the Texas Women's Health Program had an adverse effect on low-income women in Texas by reducing the provision of highly effective methods of contraception, interrupting contraceptive continuation, and increasing the rate of childbirth covered by Medicaid."

Politicians Trying to Shut Down Planned Parenthood Tell Women to Just Go to the Dentist. Seriously.

Out-of-touch politicians are claiming that other providers can “absorb” patients who would be left in need of care if other states followed Texas’ lead and tried to block Medicaid patients from Planned Parenthood. Those providers actually don’t exist, and yet these politicians are doubling down on their ridiculous and dangerous claims. 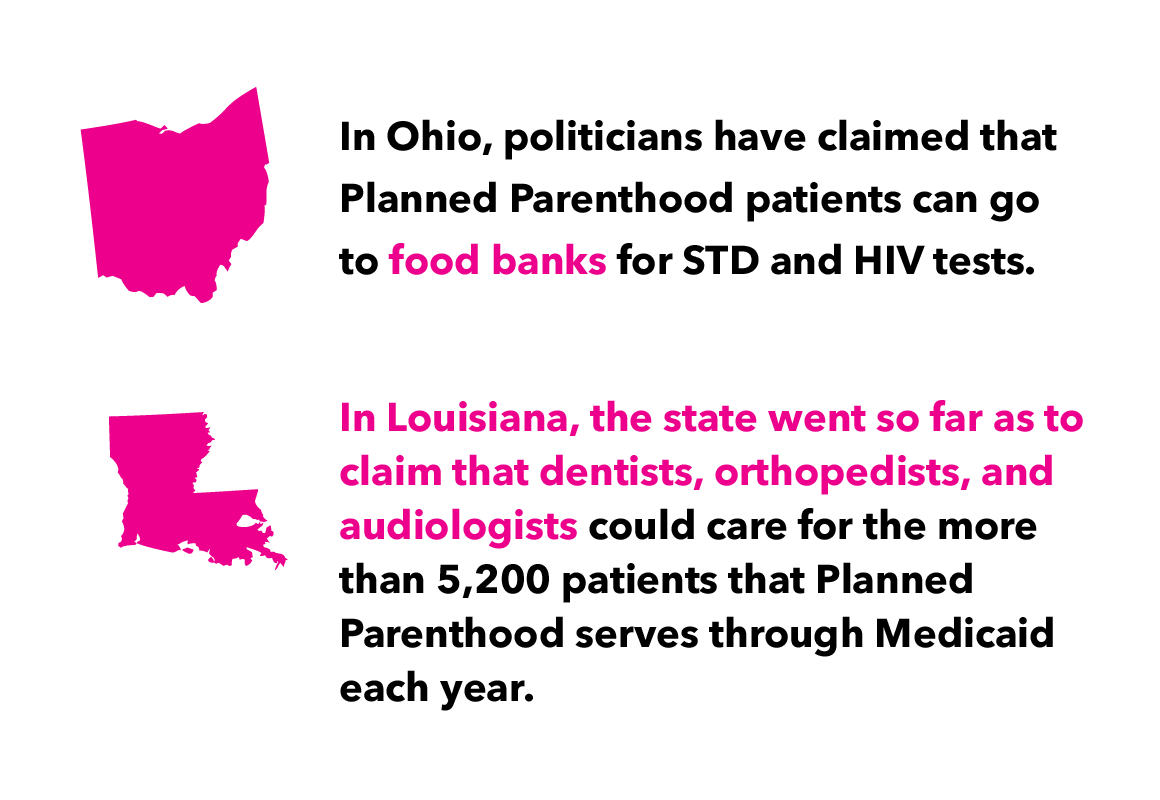 Texas should be a cautionary tale for politicians in states targeting care at Planned Parenthood. We’re talking about Arkansas, Alabama, New Hampshire, Louisiana, North Carolina and Utah, which have enacted policies to block Planned Parenthood patients from care through public programs — as well as Ohio, which is expected to follow.

In addition to Texas, officials in Ohio and Louisiana have claimed that other providers can meet the need for care without Planned Parenthood. Tragically, that hasn’t been the case:

Here’s what we know: Planned Parenthood is a critical and irreplaceable part of the health care infrastructure in this county. There’s a clear political agenda behind these moves against Planned Parenthood: to create a country where women — especially low-income and rural women — have zero access to basic, reproductive health care.

Citing a discredited smear campaign, politicians continue to push their dangerous policies despite public opposition from the women, men and families they are charged to serve.

President Biden’s nominee to lead the Department of Health and Human Services could get right to work to end the domestic gag rule, modernize and rebuild Title X, strengthen Medicaid, and roll back Trump birth control rules that permit employers to deny workers coverage. But he needs your help to get confirmed.

The new administration has a mandate to lead. Co-sign our letter to the Biden-Harris team on how we build back sexual and reproductive health and rights.