Today we celebrate the birthday of Dolores Huerta, an iconic activist in the progressive movement. Throughout her life, Huerta has committed herself to fighting injustices that discriminate against workers, immigrants, and women. Most notably, she is known for co-founding the United Farm Workers (UFW) movement. She continues her legacy of activism through the Dolores Huerta Foundation, lecturing, speaking out, and advocating for immigrants, feminism, and civil rights. 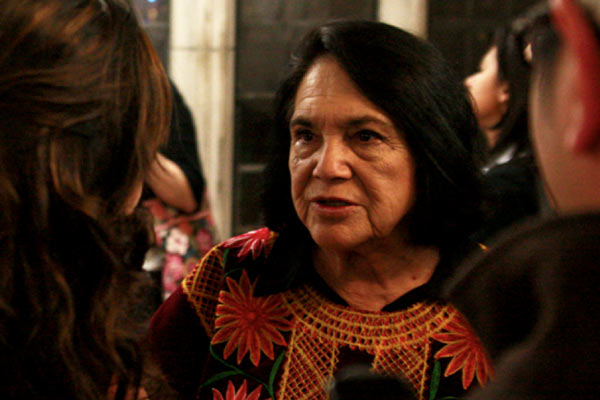 In recognition of her birthday, this list of feminist activists honors the legacy of Chicanas who, in the face of misogyny and racism, fought for justice in their communities.

She helped start the feminist group Hijas de Cuautémoc, and co-founded the first Chicana scholarly journal, Encuentro Femenil. Together, with other writers and activists, they addressed issues affecting Latinas, such as child care, reproductive rights, and the feminization of poverty.

In 1910, at the beginning of the U.S.-Mexico Border Wars, Idar resigned from teaching. She was frustrated by the poverty in the schools where she taught, so she became a writer at a weekly newspaper, La Crónica.

Throughout her career as a journalist, she reported on the violent discrimination against Mexican-Americans at the time. Idar became famous for helping to organize one of the first Mexican-American feminist social movements, and outwardly protesting the dispatch of U.S. troops at the border during the Mexican Revolution.

In 1987, author, poet, and Chicana activist Anzaldúa published the canonical feminist text Borderlands/La Frontera: The New Mestiza, a look at the internal melting pot of the Chicana consciousness.

Alongside Cherríe Moraga, she co-edited the feminist classic This Bridge Called My Back, featuring poems, essays, and criticism of white feminism, written entirely by women of color.

Her work remains some of the most heart-wrenching examples of the difficulties of navigating the world as a woke, queer Latina. Regarding this, she writes, “A woman who writes has power, and a woman with power is feared.”

After attending Yale, Sánchez returned to her childhood neighborhood in San Antonio, Texas, to work as a community organizer. She began by working with the Southwest Voter Registration Project, the Mexican American Legal Defense and Education Fund, and Chicana Health Policy Development.

After witnessing human rights abuses abroad, she began to focus her attention on building national and international feminist solidarity movements. In 1987, she helped found the Esperanza Peace and Justice Center. This organization, led by Lesbians of color, continues to exist today, and publishes a monthly news journal called “La Voz de Esperanza.”

Hernández has been a leader in major civil rights cases affecting Latino communities in Southern California.

As a first-generation Mexican immigrant who grew up in East Los Angeles, she witnessed firsthand inequality and poverty in Latino communities. She has recently garnered recognition for her work in the documentary No Más Bebés, which documents the forced sterilization of Mexican immigrant women at Los Angeles County-USC Medical center during the late 1960s and early 1970s.

Hernandez was one of the lawyers representing ten plaintiffs in the case known as Madrigal v. Quilligan, which sued the Los Angeles County doctors, the state, and the U.S. for civil rights abuses against immigrant women.