My name is Sadie and I’m from Brownsville, Texas. I led a daily protest at the Texas Governor's Mansion for nearly three weeks, calling on Gov. Greg Abbott to veto attacks on women's health. Abbott didn’t listen, but we refused to let this happen quietly. The new budget bans Planned Parenthood from the state's Breast and Cervical Cancer Services program, which gives vital cancer screenings to low-income and uninsured women. That attack on women’s health really inspired me to fight back. Here’s why.

My hometown of Brownsville is a border town next to South Padre Island. A large part of the population is low income and most of the citizens are Mexican Americans, including me and my family. It’s pretty conservative because of cultural traditions and strong religiosity. I remember in 2010 a teacher asked my high school class to attend a Tea Party rally for extra credit. I definitely attended...in my “Obama for President” shirt. 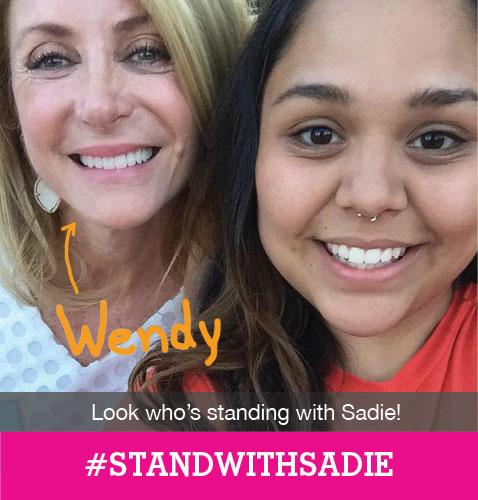 Former Texas state Senator Wendy Davis stood in solidarity with Sadie Hernandez in the fight for women's health and rights.

While I was growing up, there were very few opportunities for progress because the schools were underfunded and understaffed, and not all schools were equal when it came to the quality of education. What I noticed the most was how much the lack of sex education hurt the community. Many girls I knew with promising futures gave each other extremely inaccurate information on sexual health, like "if you have sex, do it on your period because then you won't get pregnant.” As a result, many of my closest friends got pregnant. The district’s way of tackling the “problem” was making a school specifically for pregnant teens Lincoln Park — but there were too many pregnant girls in the city for the school and it was overcrowded, so they forced girls to graduate early, and finish school "online."

Regardless of its many setbacks (I do have pride for Brownsville), I love the friends I made growing up there, entomatadas are delicious, the culture is rich, and the beach is fun. It’s a town with so much potential and so much room for growth. I want my childhood friends to be able to live and raise their families in safe communities, and I want my loved ones to be able to access safe and legal health services without government interference. I want this for my people, and I want this for me! 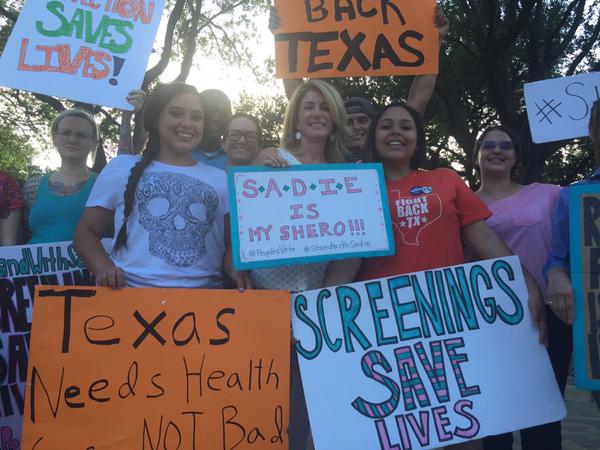 I’ve witnessed firsthand the struggles people have to go through when they don’t have access to health care, and even worse, when they find they have cancer and can’t afford treatment. In Brownsville, families have to hold fundraisers and do things like host bake sales or sell lunch plates to pay for treatment that should be available and affordable to them in the first place.

Texas is making a bad situation worse with the new budget that passed through Gov. Abbott’s desk. It will put more families in extreme situations. This budget will ruin the lives of many — whether it be their mental state, financial state, or their faith. But, more importantly, people will die as a result of this new budget. And we have seen that the women most likely to die are low-income Latina and African American women, who rely upon this cancer screening program. I couldn’t sit idly by and let this happen — I mean, Planned Parenthood is a woman’s only provider in some parts of Texas! I refused to let that happen quietly.

That’s why I made a conscious effort to start the People's Veto. Enough is enough. 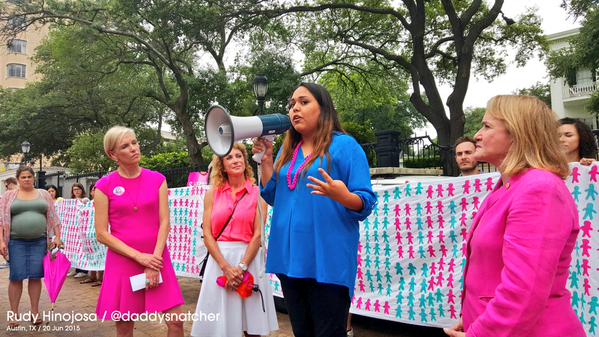 On June 20, Sadie Hernandez and those who stood with her rallied in support of Texas women's health and rights.

While the People’s Veto began as a protest against the new budget, in light of the latest HB2 ruling it grew to advocate for all necessary and critical reproductive health care services. I was in Austin protesting every day because I believe the Texas government shouldn’t interfere with our individual liberties as American citizens; all Texans have a right to accessible and necessary health care. I wanted the governor to know that by not line-item vetoing the budget measure, he is essentially turning his back on Texas families and me. Now that it passed, Abbott is going back on the promises he made before and when he took office. Texas women and families deserve better.

Keep Standing With Me!

While my 17-day demonstration in front of the governor's mansion has come to a close, I will not stop standing up for Texas women, and I am calling on Texans from across the state to join me in our long-term fight to make sure women get access to the care that they deserve. Sign up to volunteer for Planned Parenthood Texas Votes and #StandwithSadie by taking action in your local community.