State and local lawmakers may not be able to outright ban women’s access to safe, legal abortion, but that hasn’t stopped them from trying. States across the country have enacted 51 new abortion restrictions in the first six months of 2015 — despite the fact that Americans overwhelmingly support a woman’s right to access safe, legal abortion without government interference, according to data released yesterday from the Guttmacher Institute. 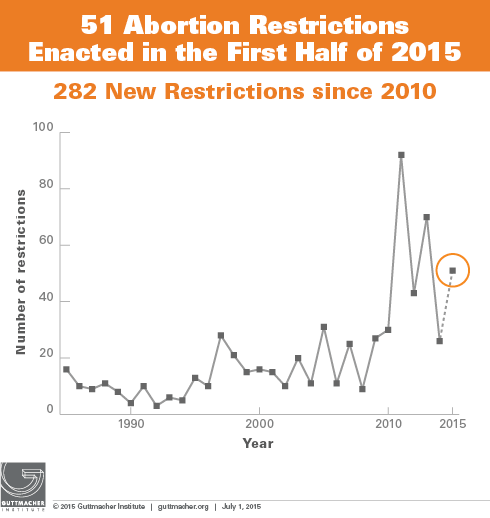 All these anti-abortion laws follow an avalanche of abortion bans and restrictions across the last five years: States enacted 282 restrictions on abortion since 2010, many under the false guise of safety — when they actually jeopardize women's health and safety.

Abortion is one of the safest procedures performed in the U.S. Data, including from the CDC, has shown abortion has a 99% safety record. Restrictions passed in the states don't support women's health.In fact, delays and restrictions hurt women by reducing access to safe abortion, as well as the means to prevent unintended pregnancies.

The Guttmacher report highlights multiple statewide trends in the first half of 2015, including an influx of medically unnecessary restrictions including:

Several of these laws have recently been temporarily blocked by the courts.

What all this means: In large parts of this country, women have the right to safe, legal abortion — but politicians are preventing them from exercising that right.

“The millions of women who come to Planned Parenthood and other women’s health care providers each year are not coming to make a political statement. They’re coming because they need access to high-quality, affordable, and compassionate health care. Layering on medically unnecessary restriction after restriction just leaves women with fewer and fewer trusted places to turn,” said Planned Parenthood Federation of America President Cecile Richards. 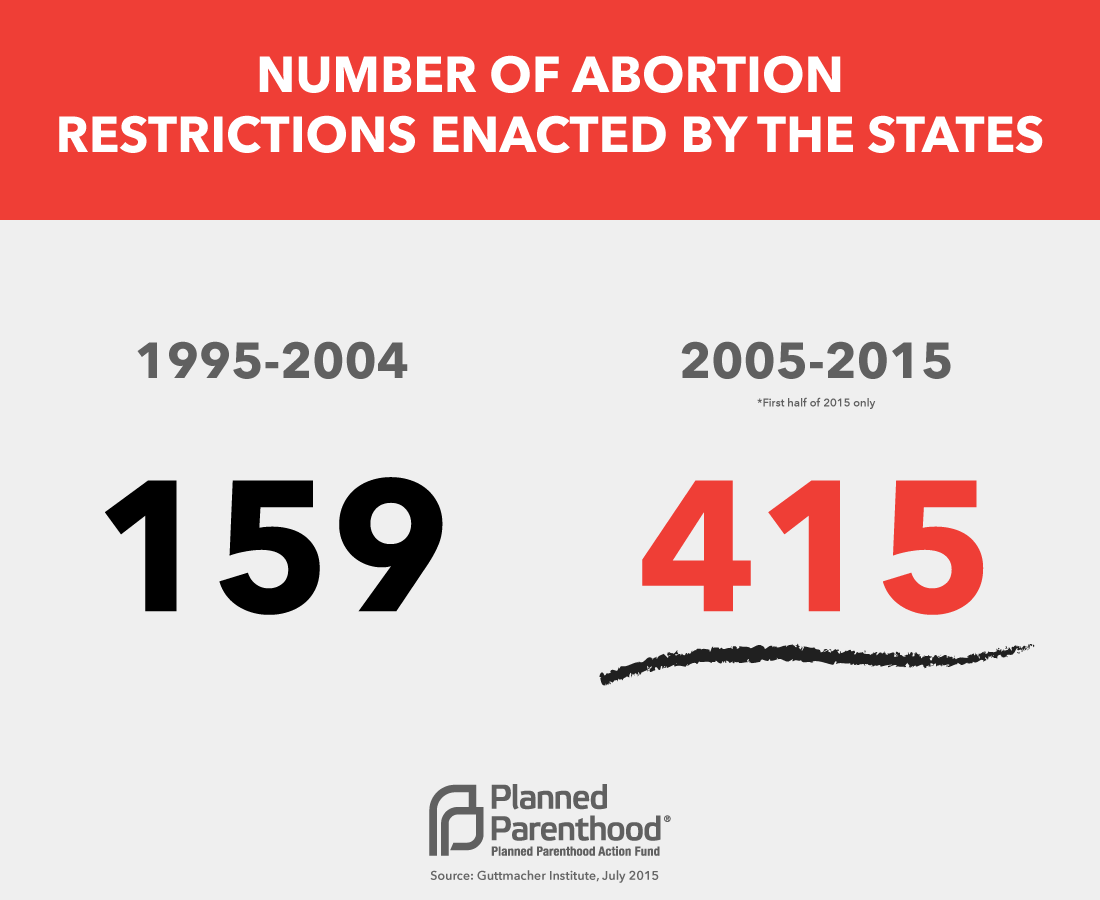 This avalanche of restrictions has given rise to millions more women, men, and young people stepping up to fight back. Thanks to an outpouring of support, Planned Parenthood has been able to open new health centers across the country. Women’s health advocates beat back bad bills, and pushed forward new laws that increase women’s access to care.

Lawmakers be warned: There’s a new generation of women leading this fight. They’re storming state capitols and protesting outside of Governor’s mansions. And they’re making sure their voices won’t be ignored.

Leading medical groups including the American College of Obstetricians and Gynecologists oppose laws intended to restrict access to safe, legal abortion — because they pose a risk to women’s health by reducing access to safe medical care.

For more than 40 years, ever since Roe, more than two-thirds of the public has supported that decision and said abortion should remain safe and legal. Two recent Gallup polls found increases in support for abortion access and increases in people who say abortion is morally acceptable:

68% of Millennials don't want to see Roe overturned,and 72% of Republicans think abortion should be available.

A VOX/PerryUndem in March also found that:

In November, when voters had the chance to vote directly on anti-women’s health measures, they rejected them soundly. Voters in Colorado and North Dakota rejected “personhood” measures with large majorities.  Voters defeated a key state house sponsor of the North Dakota personhood legislation, as well as one of the bill’s most outspoken advocates.