You remember our newly-coined term gynotician? A politician who feels more qualified than women and their doctors to make women's health care decisions. It seems there were quite a few politicians across the country trying to earn the Gynotician title and get involved in the personal and private medical decisions best left up to a woman, her faith, and her family.

This year's nominees include:

Governor Pat McCrory went for the triple crown in this category. McCrory went back on his OWN campaign promise made less than a year before the bill passed and signed legislation that significantly reduced NC women's access to safe and legal abortion. It strips city and county employees of abortion coverage and denies women and their families the option of buying a health plan that covers abortion through the health care exchange, even though the federal law requires consumers use their own money to pay for it.

The most infamous element was how it was pushed through: the provisions were added to a motorcycle safety bill so it could pass quickly. Sensing he had upset his constituents, McCrory tried to make amends by bringing out a plate of cookies to protesters. Literally.

No wonder 80 percent of voters disapprove of the Gynotician tactics used to move this bill forward.

Rep. Blackburn has had her fair share of transgressions against women's health and rights, like the time she said women "don't want" pay equity laws or when she became responsible for managing the nationwide 20-week ban on abortion in the House of Representatives.

But she really hit the big time, when she attached a provision that would allow any employer to deny women access to preventive care based on a "moral objection" during the fight that led to the government shutdown. That's right, Blackburn was so willing to deny women coverage for preventive care like birth control, HPV testing, breastfeeding services, and even counseling for domestic violence, that she was willing to shut the government down over it. 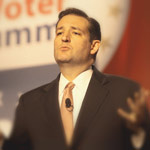 In office less than a year, Texas Senator Ted Cruz made a name for himself over his obstructionist tactics to delay the implementation of Obamacare. Over the summer, he made his top priority very clear: "My focus for the next 61 days is very directly targeted to one thing, and that is working to defund Obamacare."

And Cruz did just that: he filibustered a bill in an attempt to delay the implementation of the health care law and served as one of the key architects of the shutdown. Before the shutdown happened (which cost taxpayers $24 billion ), Cruz laid out his marker: "any elected official who votes for the [continuing resolution] is affirmatively voting to fund Obamacare."

He certainly won in the short-term: the government was "successfully" shut down, but he lost both public opinion on the issue and a little bit of face when he misinterpreted the message from the Dr. Seuss children's book Green Eggs and Ham. 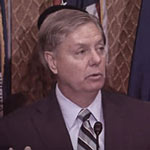 A recently minted Gynotician, Senator Graham has earned this distinction primarily for his sponsorship of the nationwide 20-week ban-- a bill that would ban abortion at 20 weeks in every single state.

The fact that the majority of voters--Democrats (78%), Republicans (62%), and Independents (71%)-- said this was the wrong issue for Congress and their state legislators to be spending time on, didn't faze Senator Graham. He moved forward this unconstitutional bill that marginalizes women with limited exceptions for rape, incest, and the health of the woman--and could criminalize doctors for up to five years. 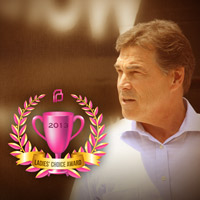 There's a reason Rick Perry has received multiple nominations for the dishonorable categories of the Ladies' Choice Awards. It's hard to find a more extreme anti-women's health politician than Governor Perry. He consistently supports and signs legislation designed to restrict a woman's right to safe and legal abortion--and is largely responsible for the catastrophic situation Texas women are faced with.

Perry was largely responsible for more than 155,000 women losing access to birth control, lifesaving cancer screenings, and well-woman exams, when the state slashed funding for a women's health program by two-thirds and made health centers like Planned Parenthood ineligible for that program in 2011. On top of that, thousands of women lost access to preventive health care after the state banned Planned Parenthood from the Texas Women's Health Program.

It was with this backdrop that Governor Perry truly "earned" the Gynotician of the Year award, after he signed HB 2, the extreme and dangerous bill that's projected to block one in three Texas women from accessing safe and legal abortion, a bill that 80 percent of Texas voters opposed passing during the special session.