The week that we celebrated the 42nd anniversary of the landmark Roe v. Wade ruling, Senator Lindsey Graham won the dubious distinction of gynotician for lamenting the, ahem, “definitional” problem with rape.

A gynotician is a politician who feels more qualified than women and their doctors to make women’s health care decisions. And Senator Graham earned the title for telling anti-women’s health activists: “I'm going to need your help to find a way out of this definitional problem of rape."

He was talking about the House bringing back a 20-week abortion ban — a companion bill to last year’s Senate version that Senator Graham introduced (a move that won him his first gynotician award).  This year’s 20-week abortion bill in the House was held for a vote, in part because of questions around whether and how the bill should make exceptions for rape survivors. 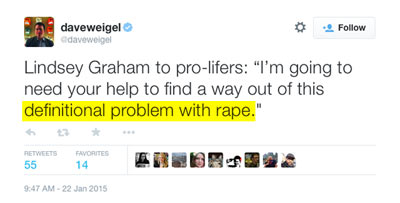 Here’s the thing: Women don't have a "definitional problem" with rape. We're really clear on what rape is. And if Senator Graham isn’t, it's probably time for him to stop legislating on it.